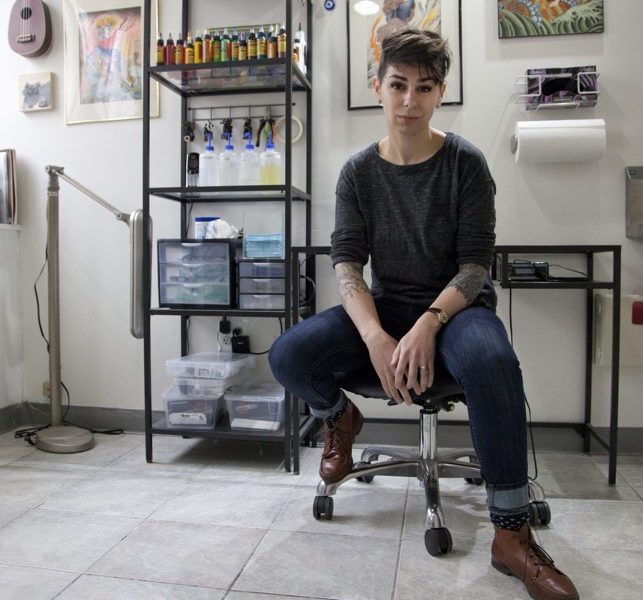 Today we’d like to introduce you to Elize Nazelie.

Elize, can you briefly walk us through your story – how you started and how you got to where you are today.
I’m a tattoo artist and owner of Brilliance Tattoo in Boston (currently on Commonwealth Ave near Allston). I started my career with an apprenticeship pretty fresh out of high school (after one semester in community college that definitely wasn’t for me). I stayed at the shop I apprenticed at for 5 years, building my clientele and strengthening my portfolio before leaving to open one of my own. Brilliance opened 6 years ago, and we’ve already outgrown our shop and will be moving to a larger location this fall/winter. Brilliance currently staffs three licensed artists and two apprentices.

We’re always bombarded by how great it is to pursue your passion, etc. – but we’ve spoken with enough people to know that it’s not always easy. Overall, would you say things have been easy for you?
Well, it would be strange, I think if the road was completely smooth, but I try to tackle one thing at a time as to not be insurmountable. When I was apprenticing 12 years ago, and working in that shop after that, tattooing (like other male-dominated trades), was a very different environment to work than it is now. There is no HR department in tattooing, and the “locker room talk” that’s been making its way into the news lately, is an everyday conversation in tattoo shops staffed mainly by men. The female apprentices at the shop were taught that having a thick skin to crude and sometimes demeaning behavior was a prerequisite to learning the trade. Growing up with two brothers, I wasn’t alien to that concept and did grow a skin, but always felt like it was an incredibly unprofessional environment to being my clients, who in the early 2000’s were, for the first time, a woman/LBGTQ+ majority. I felt like my clients shouldn’t be subjected to the commentary that goes on “in the locker room”, and my boss was simply blind to the fact that the people that were the butt of his jokes were also in the chairs all around him, paying the shop’s rent. I tried to talk to him about it a few times, and when I was reminded that it’s a tattoo shop and that’s just how it is, I started to squirrel away money and plan my and my clients’ escape.

To women working in a similar situation in whatever field you’re in, I’d say use whatever position you’re in at the moment, especially if it’s not ideal, to gain as much skill and experience in your day-to-day to raise yourself out of it. Steps that seem really small do accumulate. If you’re in retail, foodservice, or the bottom of the barrel in a field you’d like to move up in, stick your neck out for more complex responsibilities. These are all opportunities to become more of an expert at what you’re doing, and hence more valuable. Maybe ask to start helping take inventory or to learn about a task your overwhelmed manager would love to delegate. Once you understand the ins and outs of the business you’re in, you can apply those skills to an industry or niche you’re more passionate about, and move up to another job you’re happier with and start that process over, or eventually leave and do it yourself, in a way you always wanted to if your corporate overlords weren’t holding you back. By the time, I was trying to rent a place of my own, I already was running my own mini-business out of my boss’s studio, doing my own bookkeeping, inventory, and scheduling anyway, so figuring out the brick and mortar aspect of a shop was a more reasonable challenge when it came up, because how the business was going to run wasn’t in question.

There are a lot of resources to start a business and in my opinion a lack of young people starting businesses themselves. It frustrates me to look around at some of the mediocre business models that are turning a profit, and truly talented and innovative young people who are afraid to step in and do better because they’ve been conditioned to fear financial risk, and told by their employers that they can’t do better. It is a lot easier if you ask for help from everyone and anyone who will listen to your questions. There are a lot more people who want to help than you might first imagine. Some of my first stepping stones to opening my shop were taking out other woman tattoo shop owners out to lunch, asking them questions and emailing ones that lived far away for advice. For some reason, the male shop owners I asked all said it was a lot harder than I thought it was, and they didn’t think I could do it. The women were all supportive. Find your community. They are out there and want you to succeed! Ask everyone you know if they know anyone you can talk to about it.

We’d love to hear more about Brilliance Tattoo.
When I opened Brilliance, my first priority was building a shop with very strong artists, who had great attitudes when working with clients. Tattoo shops have a notoriety for being an intimidating atmosphere, where they won’t give the time of day to people who aren’t cool or tough enough, and traditionally feminine tattoos in the past were considered less serious work, even at a time where the statistics were tipping towards women in the U.S. being more often tattooed than men. This was the type of atmosphere I learned in, and folks were putting up with sub-par treatment, even from sub-par artists… and I’m sure everyone’s aware that tattooing is not a “cheap” service! I think if you’re playing well and trying to support artists fairly for original work, we should be offering something incredibly special, professional, and of high quality.

I spent the first few years of Brilliance building up the team, taking on my first apprentice, Hannah Medeiros, who’s become a local phenomenon herself, and working on narrowing down the most efficient workflow and highest quality tattoos that I could. I consider myself a color specialist, so for 5 years I mainly focused on getting the best healing, most saturated color results possible in my tattoos, as well as cohesive natural color palettes and deeper value ranges, all of which are challenges to tattoo artists. During that time I started learning more and more into floral tattoos, both because I enjoy them so much, and also it was a way to try and build a really consistent, comparable body of work. Not every single tattoo I did during that time was incredibly groundbreaking or creative, but I knew that I wouldn’t get to the work I was really wanting to do until I had the technical skills to achieve it. Luckily, through that consistency I produced a solid portfolio I’m really proud of, so that was another wonderful plus to all the practice.

Aside from my own tattooing, seeing Hannah’s career take off and the wonderful relationship I built with her during her apprenticeship, left me really missing it when she became licensed and spread her wings. I didn’t think teaching was going to become a huge part of my work at the shop, but I now have two other talented apprentices, Nic Tharpa Cartier and Hayley Fagan. I’ve found it super rewarding to teach them, both coming from totally different places artistically, to a much higher standard than I was… I’m told I’m a tough boss, which is a good thing I think! I want all my apprentices to become better tattooers than I am.

Now, I do almost exclusively floral tattoos and have made a switch in my focus this past year to work on more natural illustration, color, and lighting effects, by arranging and photographing live flowers for my tattoo designs as often as I can. It’s typical for tattoo artists to compile a collection of flower images off the internet based on what their client wants, and then resizing them digitally to one another and assembling them into one arrangement. I did this for years (and still do when I have requests for out of season, not commercially available or unrealistic combinations of flowers), but feel like I’ve definitely elevated my work since getting to just put my hand on a flower to rotate it to my liking, and take a photo of everything with a consistent size and light source, as well as the effect of gravity and reflective light the plants have on one another.

Which women have inspired you in your life?
I have so many, I’m going to try and narrow the list down to tattooing for the sake of directness. When I was apprenticing, the internet was just becoming a commonplace business tool, so access to information much more limited than it is now. My main source of inspiration was tattoo magazines. Juli Moon was probably the OG woman tattooer trailblazer in my life (although there were many before her in the 30’s-60’s), as my male mentors would tend to point me towards her to learn about “girly” tattoos. The fairy and filigree woman tattooers of the 80’s and 90’s, while not the artistic direction I really wanted to go, at least made me feel like there was a direction for me in the industry. I also apprenticed alongside the artistic genius Abbylyn Williams, who took me under her wing, and we were followed shortly by Dia Moeller who’s been interviewed here, and we banded together as a little island of support in the bullpen of our first shop experience.

Later, I came across an interview on tattoosnob.com about an artist named Esther Garcia, who’s heard this story Ad Nauseam at this point. Not only is she an incredible tattoo artist, but I was taken aback firstly by her profile photo in the article. In a time where tattoo magazines featured exclusively tattooed bikini models on the covers (not that that has changed much), and I was being encouraged to show at least some cleavage by my boss at conventions and in promotional shoots, Esther was photographed in a high necked dress with an unapologetic pixie cut (like me!), and staring, UNSMILING into the camera. She was presenting herself like male tattoo artists had always been allowed to, like herself, and not a girly caricature, and she showed me that possibility for myself for the first time (you may see some of that inspiration in my own profile photo). Years later, I reached out to her via email for advice on opening my shop, to which she responded very kindly, and we since then have become friends. She still gives me life and business advice often, mainly about valuing my self and my work, and protecting my own mental health, and is the kind of tattoo mother I try to be for my Brilliance Babies. 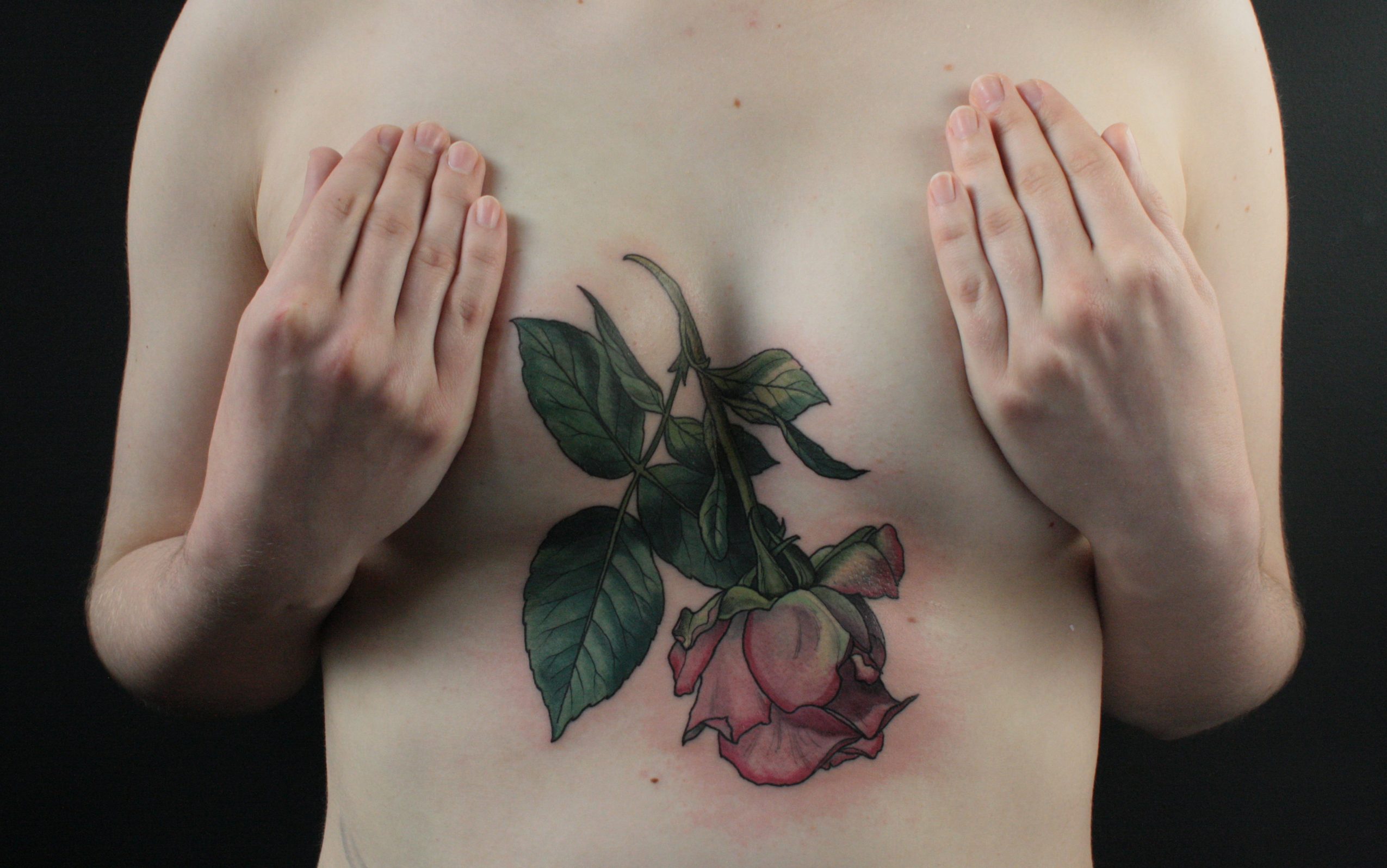 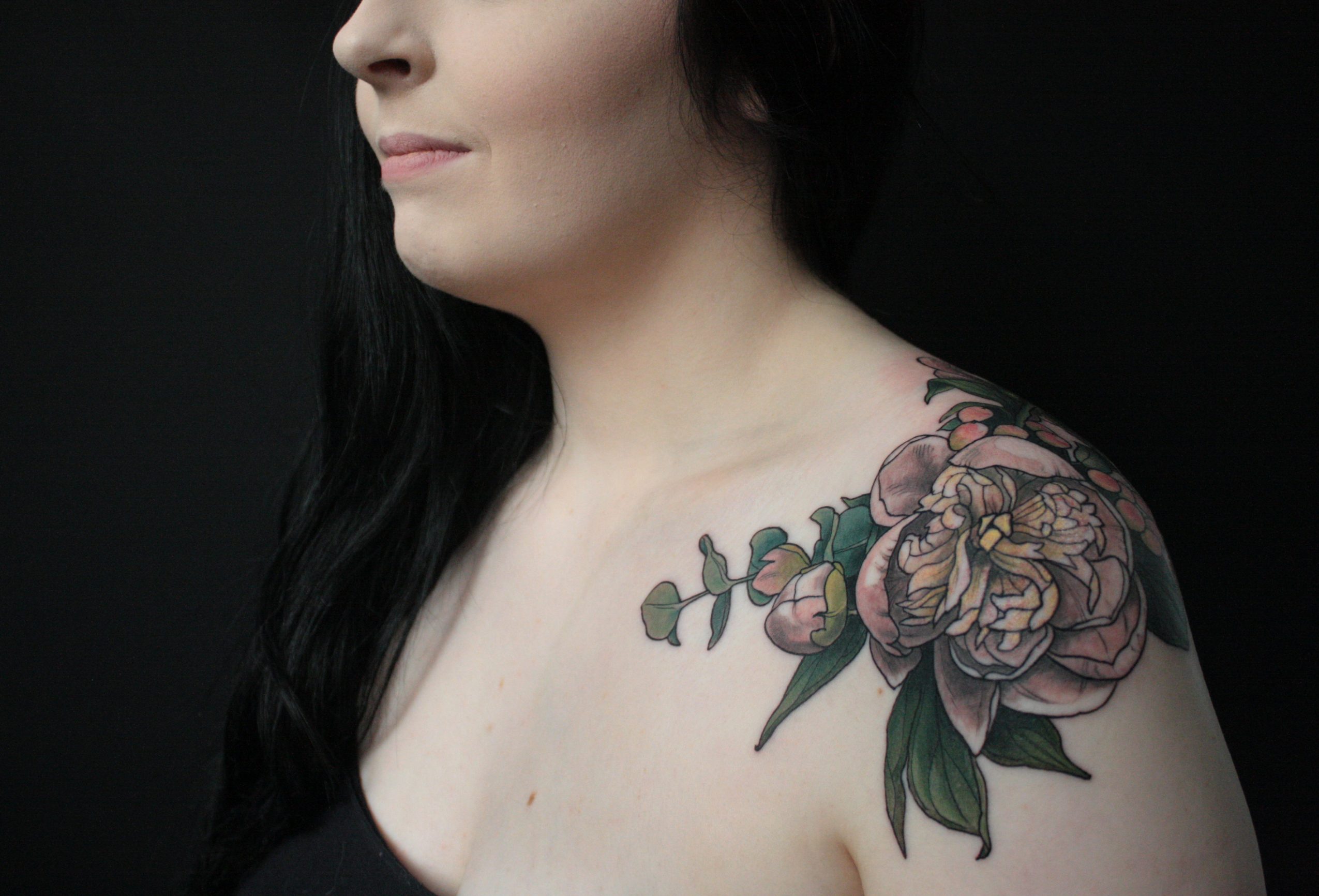 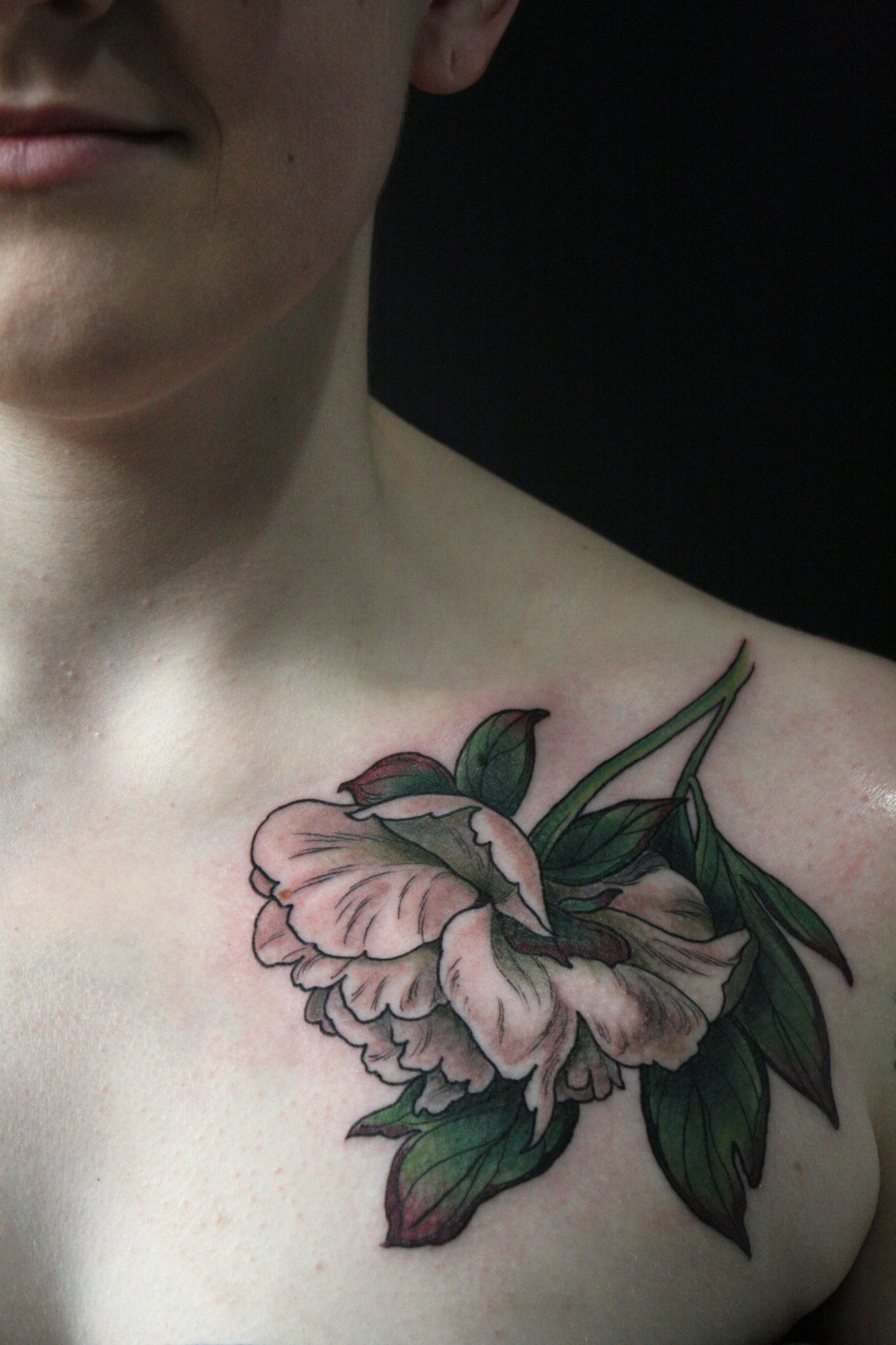 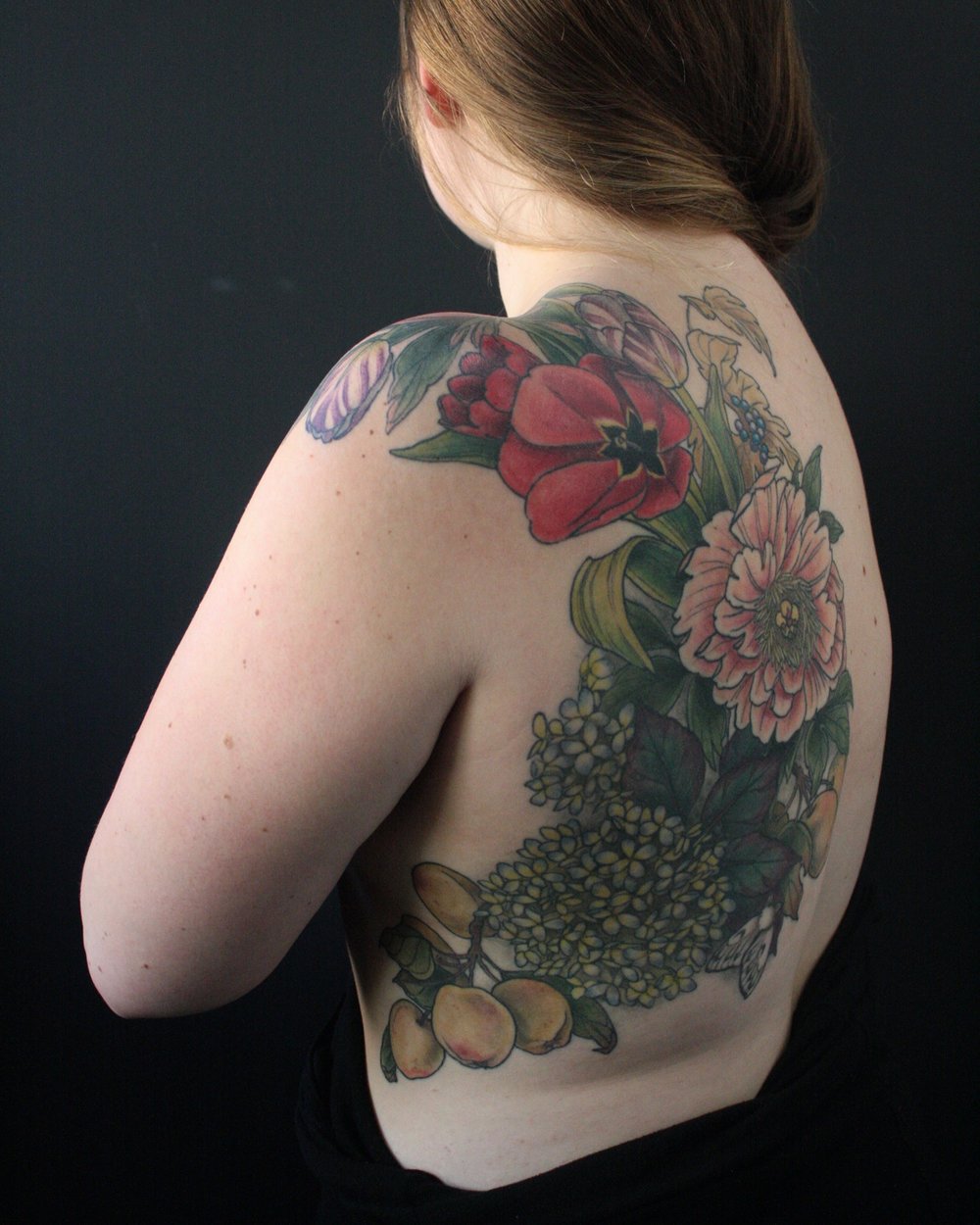 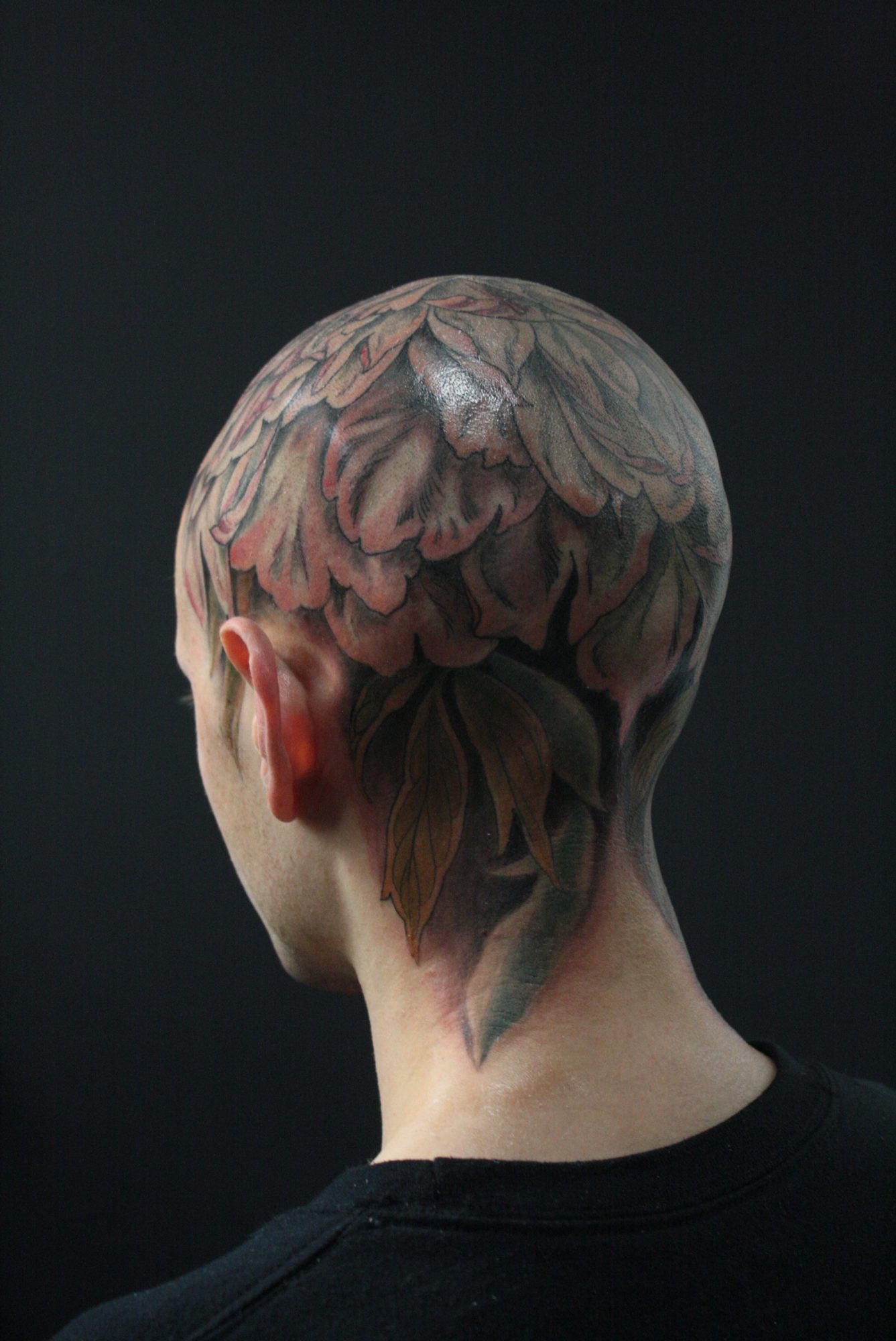 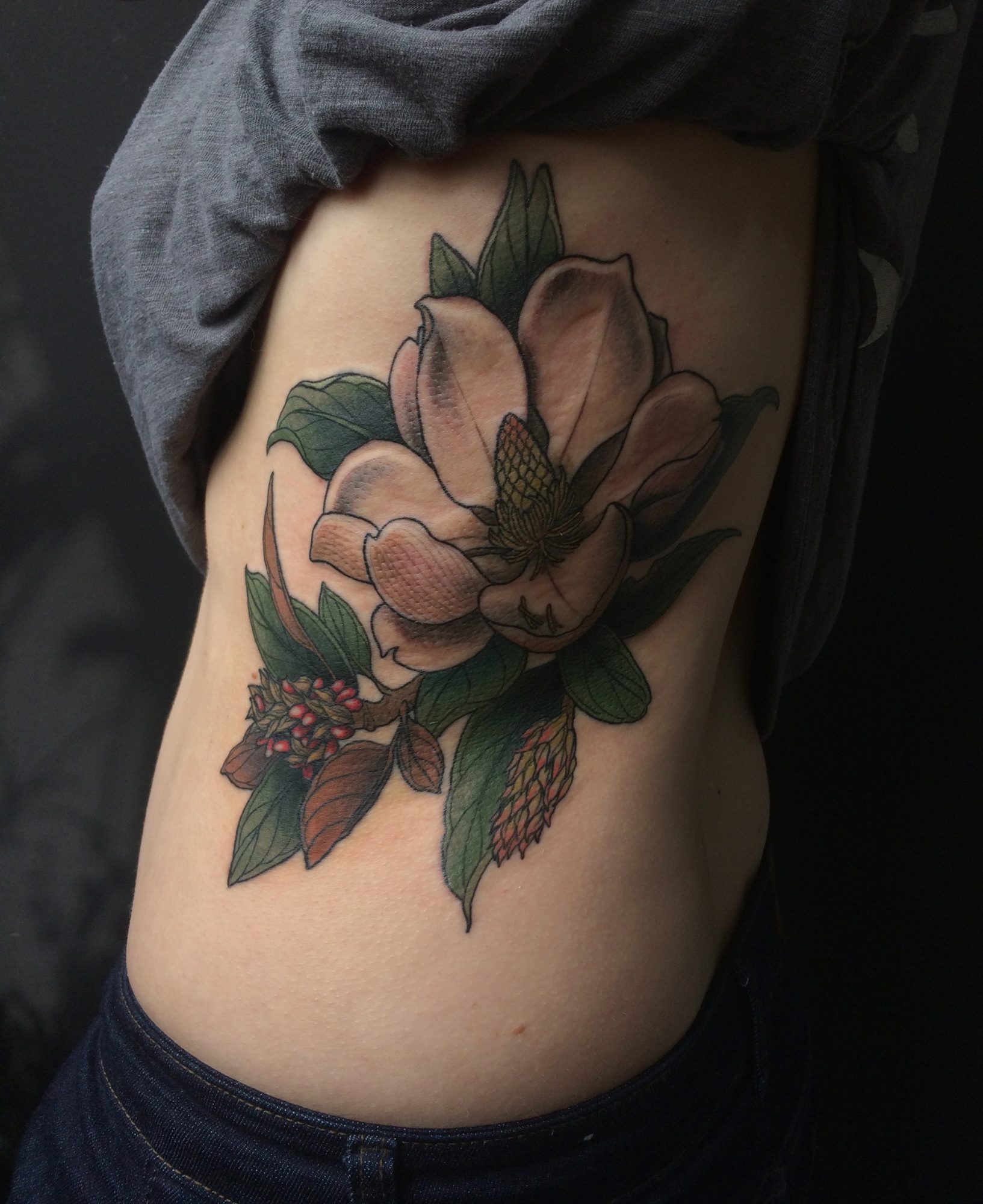 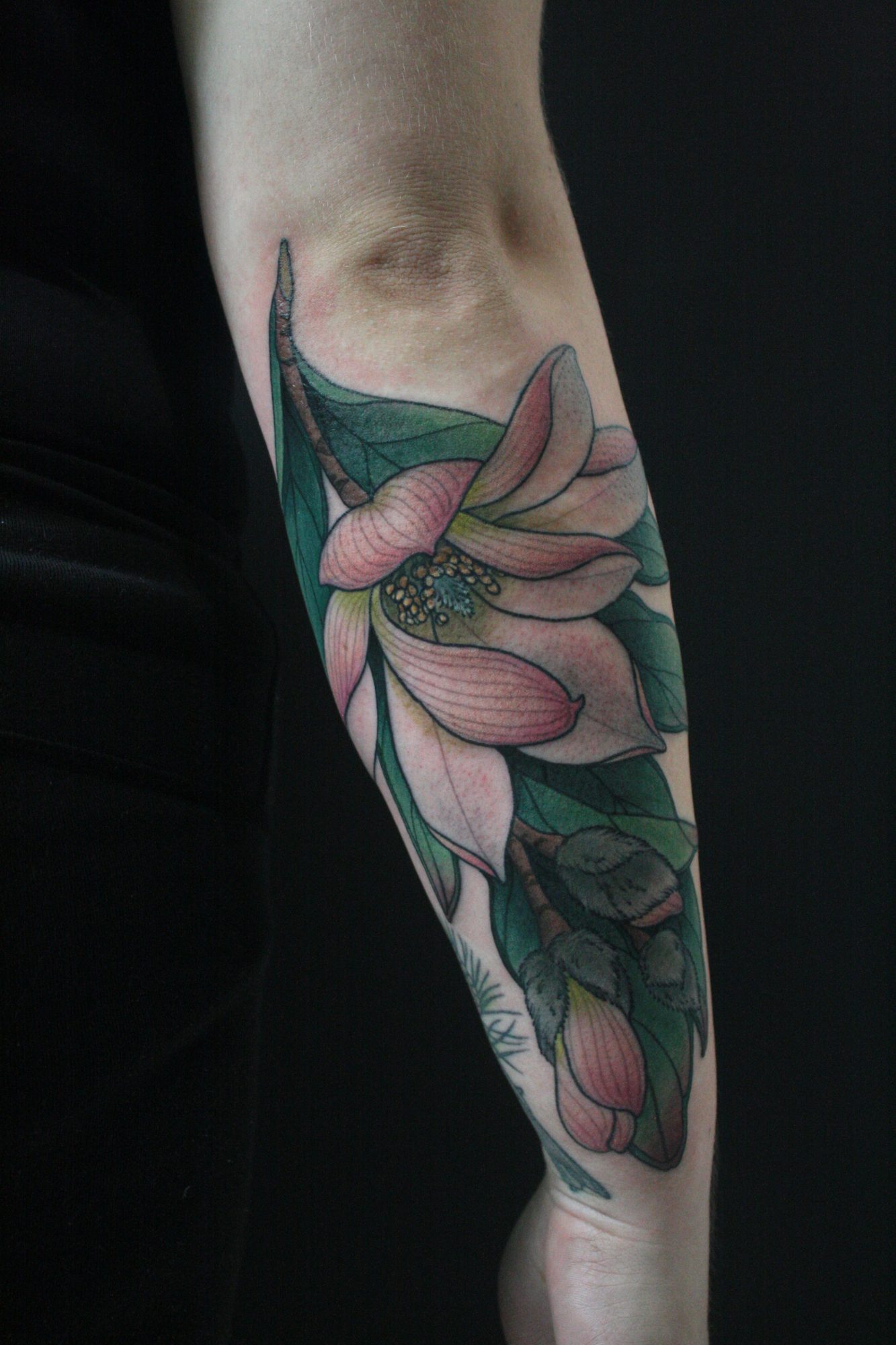 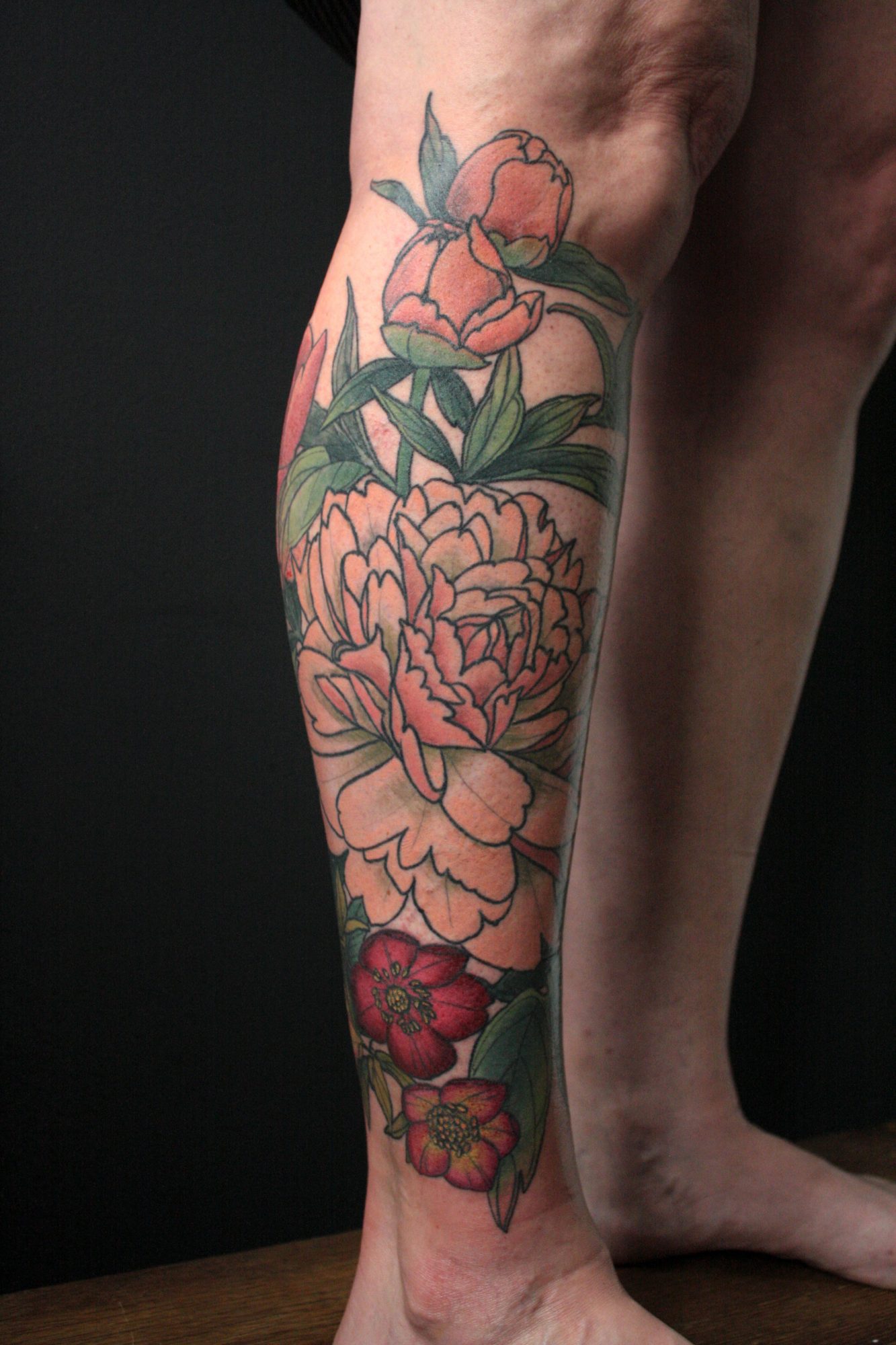 Image Credit:
Profile Photo by lindseyannsweeneyphoto.com, All others by Elize Nazelie