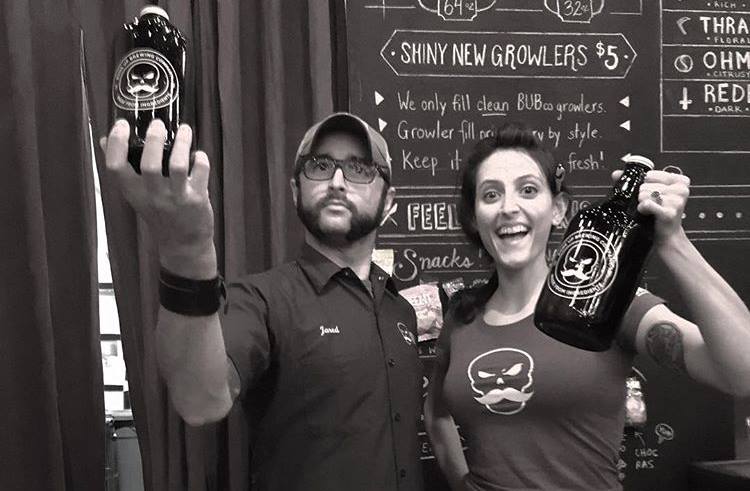 Today we’d like to introduce you to Liz and Jared Kiraly.

Thanks for sharing your story with us Liz and Jared. So, let’s start at the beginning and we can move on from there.
We’re a husband and wife brewing duo, and like most brewers out there we got our start brewin’ in the kitchen. And after years of brewing up a storm and fantasizing about a brewery all our own, we made the leap! Fueled by optimistic delusion, we drafted a business plan and started scouting for properties – “we’ll be making beer by summer!” we said.

Then after two and a half years of property searching, negotiations, permit hearings, license approvals, contractor wrangling, and a metric ton of DIY construction (with the exception of plumbing and electrical, we did the entirety of our own buildout – and it shows!) we were finally able to open! It was a long road full of hard work (and, at times, interminable waiting), but we managed to turn an abandoned industrial laundromat (whose aesthetic was much more along the lines of “horror movie set” than “inviting local haunt”) into a fully-functioning three barrel brewery with a cozy little taproom!

And during the year or so that we’ve been open, it’s been our mission to try and cram as much fun stuff as possible into our snug little space – we’ve got games and comic books and pinball and a monthly coloring contest (drawn by Liz herself!) and food popups and heavy metal trivia and casks and pizza and, of course, a constantly rotating selection of new beers! Suffice to say, we’re just gettin’ started and we try to have something new up our sleeves pretty much all the time.

Overall, has it been relatively smooth? If not, what were some of the struggles along the way?
Getting started, our biggest challenge was “we don’t know what we don’t know.” Every small business is different, and every nanobrewery is basically a custom rig. There’s no place you can go that has universal answers or solution to the, uh, unique situations you’ll find yourself in during buildout. That all seems like a distant memory now, though! Lately, our biggest challenge seems to be that we aren’t makin’ enough beer for the thirsty souls in our neighborhood. Our small ‘n cozy taproom gets filled to the gills and people are askin’ for more, so we’re taking the steps this year to expand a bit and make that happen!

Alright – so let’s talk business. Tell us about Bone Up Brewing Company – what should we know?
Jared’s Moment of Beer Awakening happened in Belgium, which had a pretty big influence on how we construct recipes – we love those bone-dry, super expressive beers. But at the same time, we both strongly prefer to drink local, so most of our day-to-day drinking has stronger roots in American brewing culture, which has had just as much (if not more) of an influence on how we brew. At Bone Up, we’re trying to draw out what we think of as the best aspects of these two fairly different brewing/drinking cultures.

Beer is our life: visiting breweries is one of our favorite pastimes, and it’s great to finally have one to call our own. We’re not gonna give you a whole flag-waving song and dance about our finest-quality ingredients and so on – beer is meant to be enjoyed. We do think you should care about your beer and you should care about where it comes from, but beer is at its heart a sociable beverage – you’re allowed to just drink it and have a good time. We think of our brewery and taproom as an extension of ourselves, and we just hope people enjoy it!

A little more than half of our menu is comprised of rotating, one-off beers, and those are changing constantly (often enough that had I answered this question last week, it’d be an entirely different list of beers)! We also have four beers we brew year-round: Extra Naked Cream Ale, Key Lime White, Wasted Life IPA, and Shut Up Kelly! Robust Porter.

Our recipes usually start as flashes of (frequently beer-inspired) inspiration that generally get written on whatever scrap of paper or whiteboard is handy. A lot of our recipes come from us experimenting with new-to-us ingredients, a hankerin’ for a style we haven’t had in a while, sometimes just because we think of a silly name and decide to build a recipe around it. Since our batch sizes are really small, we can play with new ideas all the time. Our proprietary house yeast blend (we call it Bone Up Pixie Dust) is used in all the beers we brew; it adds an extra layer of complexity and flavor to our beers.

Any shoutouts? Who else deserves credit in this story – who has played a meaningful role?
We did the vast majority of the taproom’s buildout, but there’s no way we would have been able to undertake that project without a tremendous amount of help and support from our families. Their advice, carpentry know-how, and baffling dedication to spending all their weekends hammerin’ and sawin’ away with us was incredible. And now that we’re a year into running things, we can’t neglect to mention our taproom staff (most of whom have been here since opening day) and our cellar men (who help keep the fires out in the brewery)!