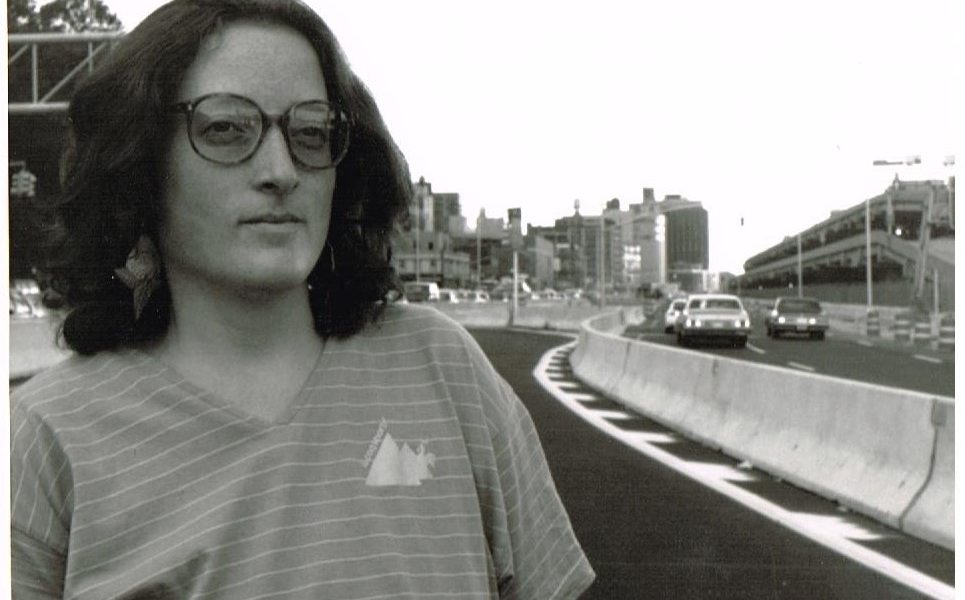 Today we’d like to introduce you to Lisa Fliegel.

Lisa is a trauma specialist and American-Israeli writer based in Boston who has worked internationally, including in Ireland, Israel and Palestine. She is a special clinical consultant to The Louis D. Brown Peace Institute, a grassroots non-profit serving survivors of victims of homicide. Following the Boston Marathon Bombing, she worked with The Israel Trauma Coalition to provide services to Boston residents and was the featured trauma expert in a BBC broadcast following the bombing.

Lisa spent her formative young adult years living at Kibbutz Ketura, a farm collective in the Arava desert on Israel’s southern tip. Her undergraduate degree in Hebrew Literature from the Tel-Aviv Teacher’s Seminary brings a bi-lingual, multi-cultural perspective to her writing.

In 1996, she founded the Arts Incentives Programme (AIP) at McLean Hospital in Belmont, MA. AIP was recognized by the Office of Juvenile Justice and Delinquency Prevention (OJJDP) for its success in reducing disparities in minority contact in the Juvenile Justice System. In April 2015, she published a chapter on her programme model, titled “Good Looking Out,” in Latanya: Gangs, Girls and Guns, Workbook & Leader’s Guide (Ed Gaskin, The Latanya Series).

Lisa’s current book, Bulletproof Therapist, is drawn from her work in three disparate places that have faced seemingly intractable pain and conflict: inner-city Boston, Israel/Palestine, and Northern Ireland. The examples of positive change that emerge in these conflict zones offer profound insights that inform and enrich the work of changemakers trying to achieve genuine peace and justice in any environment. The work combines narrative journalism, clinical insights, and memoir to provide narratives of healing. If you are looking for Lisa Fliegel you will inevitably find her at the intersection of conflict zones. Lisa has worn many hats — writer, artist, and therapist — but they are all perched upon the head of a woman who has worked throughout her life with people coping with the raw wounds of significant psychological trauma. At times this can be disorienting; at times she finds herself at a stop sign waiting for the light to change.

Whatever hat she may be wearing, Lisa encounters survivors and becomes tethered to their stories. Her perspective is like that of the war photographer whose pictures matter because they are taken on the battlefield in the line of fire. Bearing witness to the truth of what compels people to commit seemingly senseless acts of violence is both painfully searing and enlightening work. Challenging traditional practice models, Lisa is an embedded therapist: midwife to survivors’ stories, whether they unfold in real time or are unearthed after lying dormant on the battlefield.

At the age of 18, Lisa settled in Israel’s Arava desert, a central spot on the migratory route of the Syrian African Rift Valley. The harsh and breath-taking landscape compelled her to paint and create mixed media abstract-realist paintings, which she continues to create and exhibit.

Upon moving to Israel, Fliegel was hell-bent on partaking in an international proletarian revolution, while contributing to the realization of a just, moral Jewish State. She landed herself on a small communal, agrarian society, a utopian venture known as Kibbutz Ketura – only to find herself tangled up in the drip irrigation hoses she was supposed to be installing to irrigate the winter crop.

Fliegel joined the Israeli army — because it was the only way to earn legitimacy as a pacifist. She studied Hebrew Literature, and was depicted as an elderly Jewish bird guiding viewers on a tour of Jewish History in a film that she worked on, and was eventually named for her.

In the course of her twenty years in Israel, Lisa catapulted from being a wayward farmer to land a gig as a journalist on the cusp of world-changing events in the Middle East. She attempted to get the Israeli Army out of Beirut and to defend the rights of Palestinian workers employed by Israeli companies. She didn’t set out to be a journalist, but her proclivity for seeing the news up close — fact versus fiction, brought her to a vantage point valued by the press. This profession crept up on her while she was in Tel-Aviv studying to become a therapist. She rationalized that she was not a dilettante by saying:

“It’s all really the same thing. You’re trying to get to the core, to the truth of a story, trying to figure out why things turn out the way they do and how they might change for the better. In either case if people don’t trust you, you can’t do your job — so you have to figure out how to build an alliance.”

As the Oslo Peace Process (1993-1995) progressed she finished her supper at The Last Temptation restaurant in Jericho, and scurried up the rooftop to see the Palestinian police cross from Jordan over the Allenby Bridge to usher Palestinian autonomy into the sleepy desert town. As Israel and Jordan negotiated the terms of their peace agreement (1994), she arranged a fashion show where Israeli, Palestinian, Jordanian, and Egyptian textiles were modeled for the first time on one stage. Lisa was convinced that peace had come and everyone had something nice to wear and realized that she could return to the USA to finish her Art Therapy Degree — somewhere where there was a lot more water.

Please tell us about your art.

My writing is a clarion call for peace making through trauma-informed practice. I compose narratives of healing drawn from my work in three disparate places that have faced seemingly intractable pain and conflict. The healing relationships that mark my stories conjure a distilled wisdom that can dramatically reshape how we interpret violence and achieve resolution.

As a writer and international trauma specialist, I describe my work as an Embedded Therapist. I give a street-level view of the conditions that are created whereby violence begets trauma — and trauma untreated, begets violence — once again. From Israel to Boston, from Boston to Northern Ireland; from my work with adolescent girls to working with boys in the inner city; from conversations with Senator George Mitchell — to confrontations with guards at West Bank settlement outposts; I convey the essentials of working with psychological trauma as an instrument for the peaceful resolution of conflicts in the inner city and on the world stage.
*
I came of age at a central spot on the migratory route on the Syrian African Rift Valley. In the course of my twenty years in Israel I catapulted from being a wayward farmer to land a gig as a journalist on the cusp of world-changing events in the Middle East. I didn’t set out to be a journalist, but my proclivity for seeing the news up close brought me to a vantage point valued by the press. It’s all really the same thing- being a therapist and a journalist. You’re trying to get to the core, to the truth of a story, trying to figure out why things turn out the way they do and how they might change for the better. In either case if people don’t trust you, you can’t do your job- so you have to figure out how to build an alliance.

I left the desert but the desert never left me. I paint watercolors and construct mixed media collage of the Edomite Mountains, the Arava Valley. My paintbrush goes where I for- so I paint the hills and gardens of Vermont, the Catskill forests, and the Caribbean Seas. I have exhibited widely in Israel and the USA, and my artwork has been published throughout the world.

What do you think about conditions for artists today? Has life become easier or harder for artists in recent years? What can cities like ours do to encourage and help art and artists thrive?
You really have to be a social media guru to move yourself forward in the field. It used to be that earning a living was the biggest distraction from writing and painting- but today it’s takes enormous amount of work and resources building a website, a social media platform, a social media presence…Even the most talented writers and visual artists must devote time and resources to ‘branding.’

I feel eternally grateful for the fact that I live in the Brookside Artists’ Lofts= a project of the City of Boston. Without affordable artists housing I would never have been able to remain in the city. Also, Jamaica Plain Open Studios is a fabulous event which gives me a lot of exposure and I get to meet hundreds of art-lovers. I wish it wasn’t always around the Jewish Holidays!

There is also the irony that to get grants to do your art- you have to have a proven track record of being published and having exhibited. I am in a unique position as well- in that although I have been published widely locally, nationally, and internationally, my most important writing is about my trauma work and adventures in conflict transformation. It’s a symbiotic relationship one does not lord over the other. I am a writer that is how I define myself-but the world doesn’t allow me to write and paint full time. So, what’s a girl to do?

How or where can people see your work? How can people support your work?
For a full list of my publications go to Bulletproof therapist.com and subscribe. There is also a link to my artwork there. Better yet contact me through the site and arrange a studio visit at my loft in Jamaica Plain. 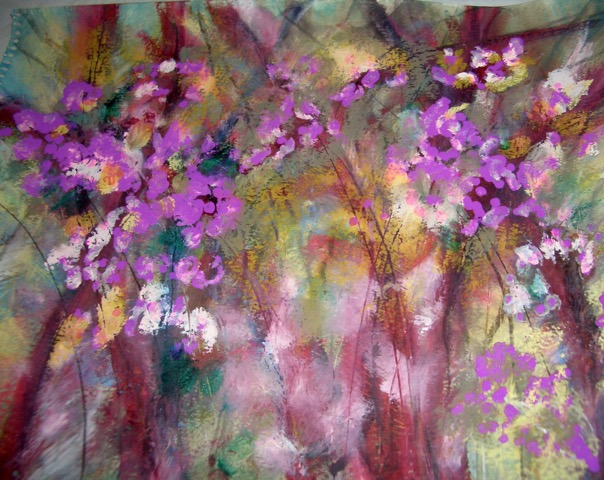 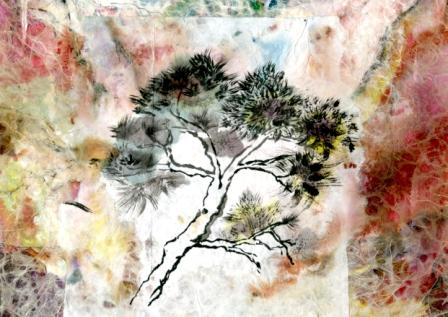 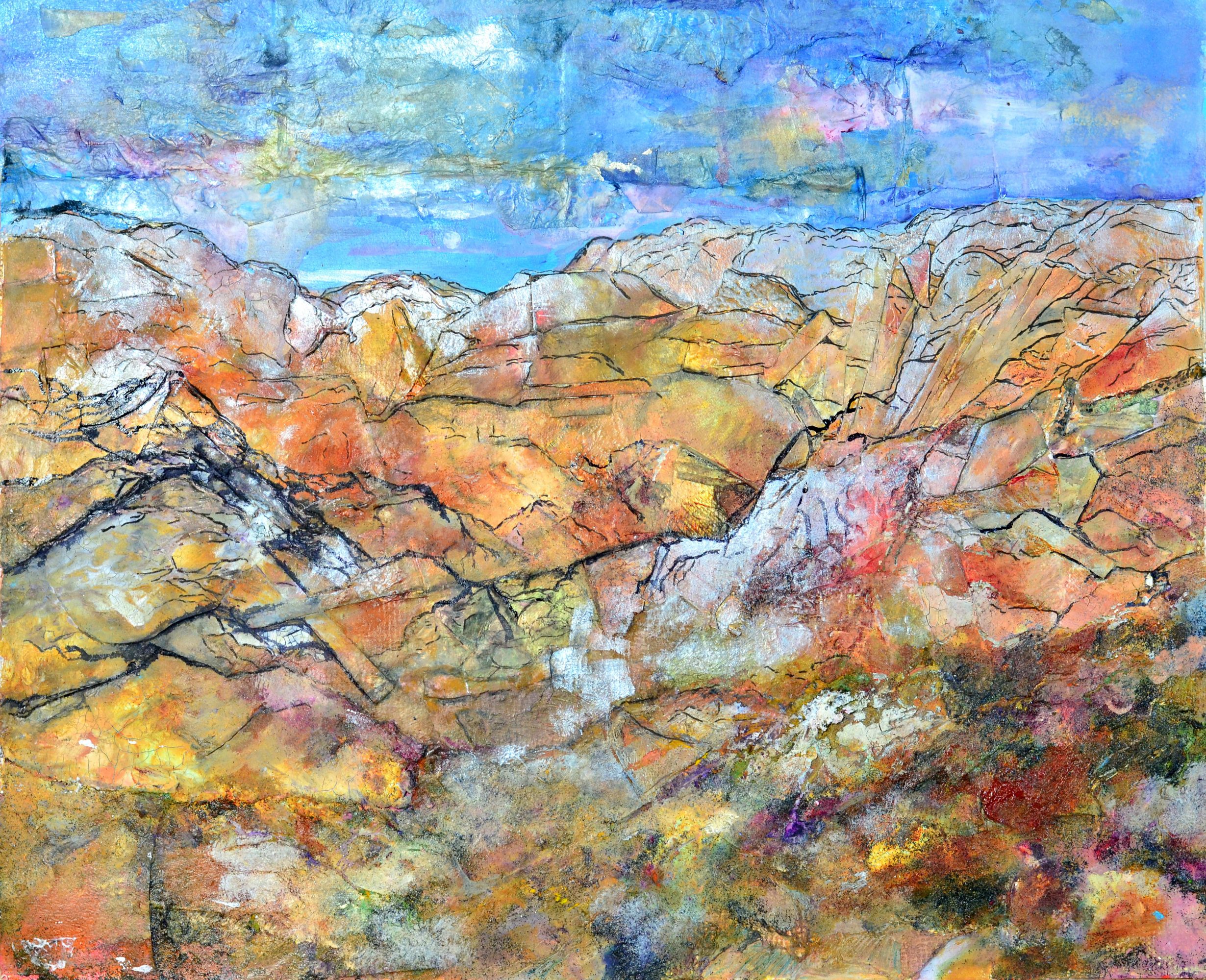 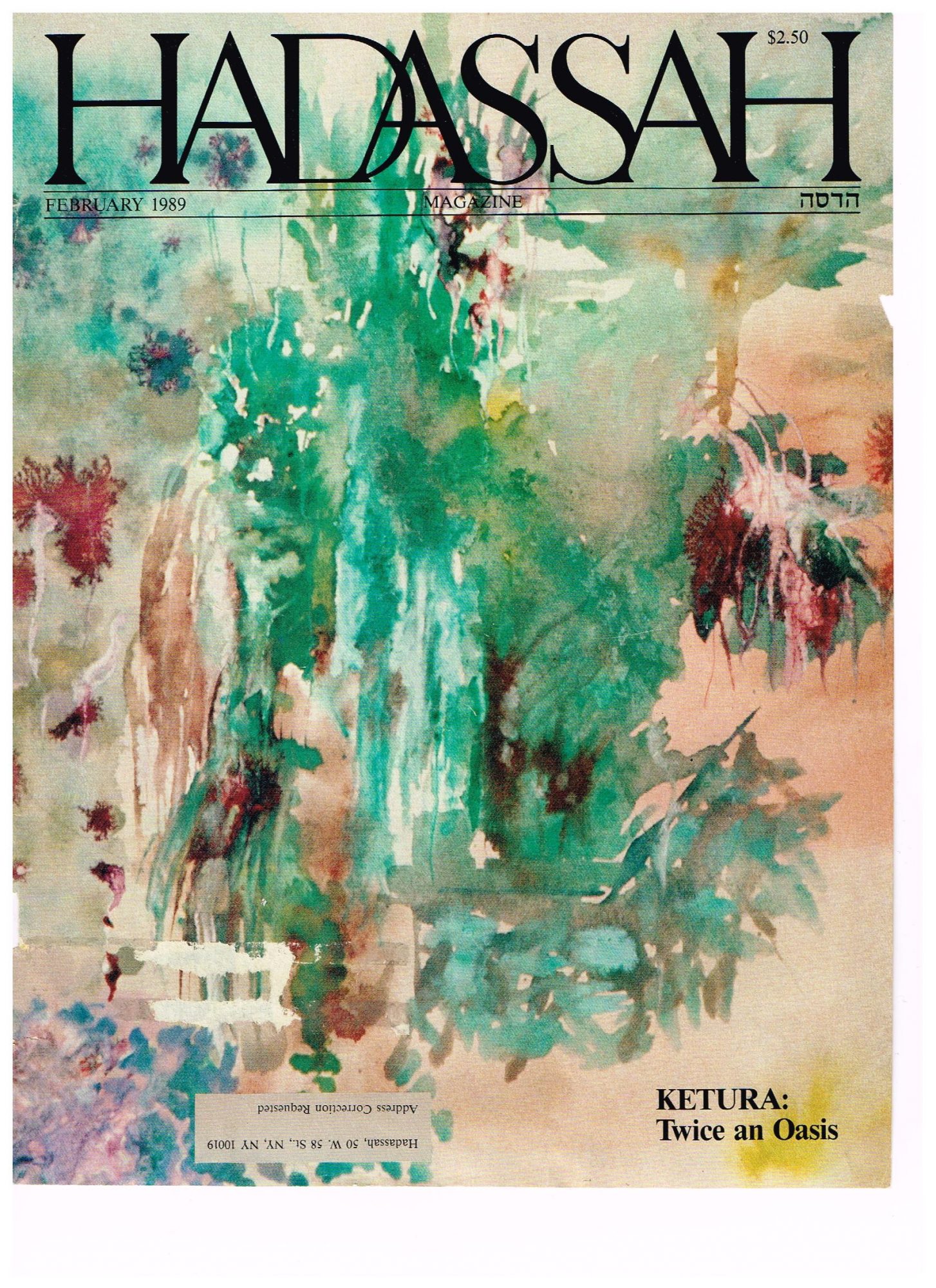 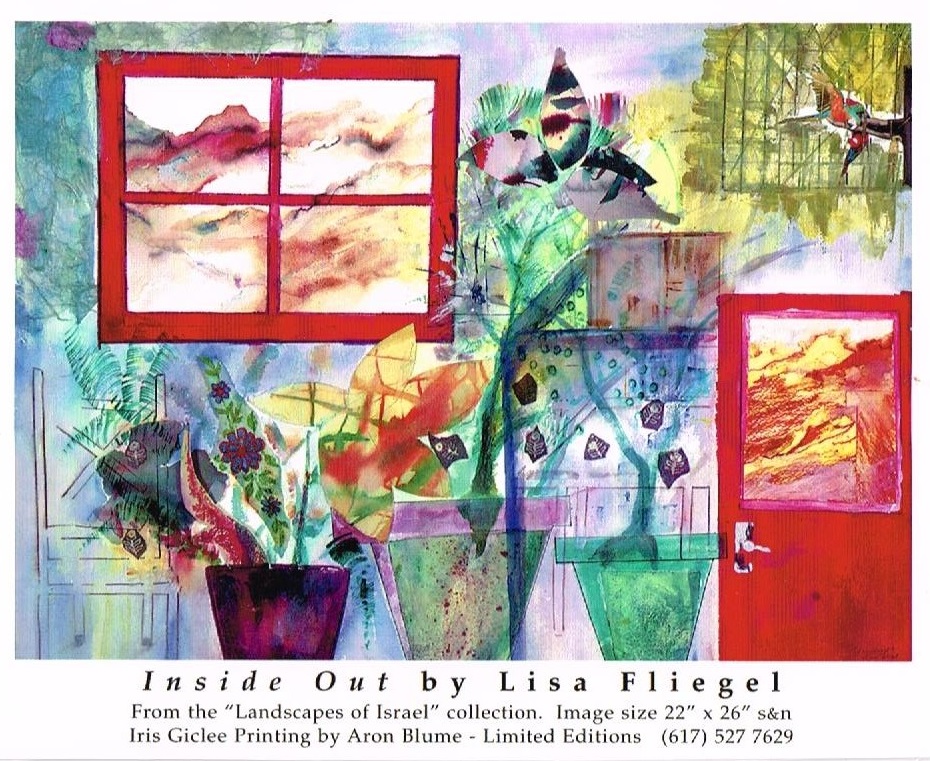 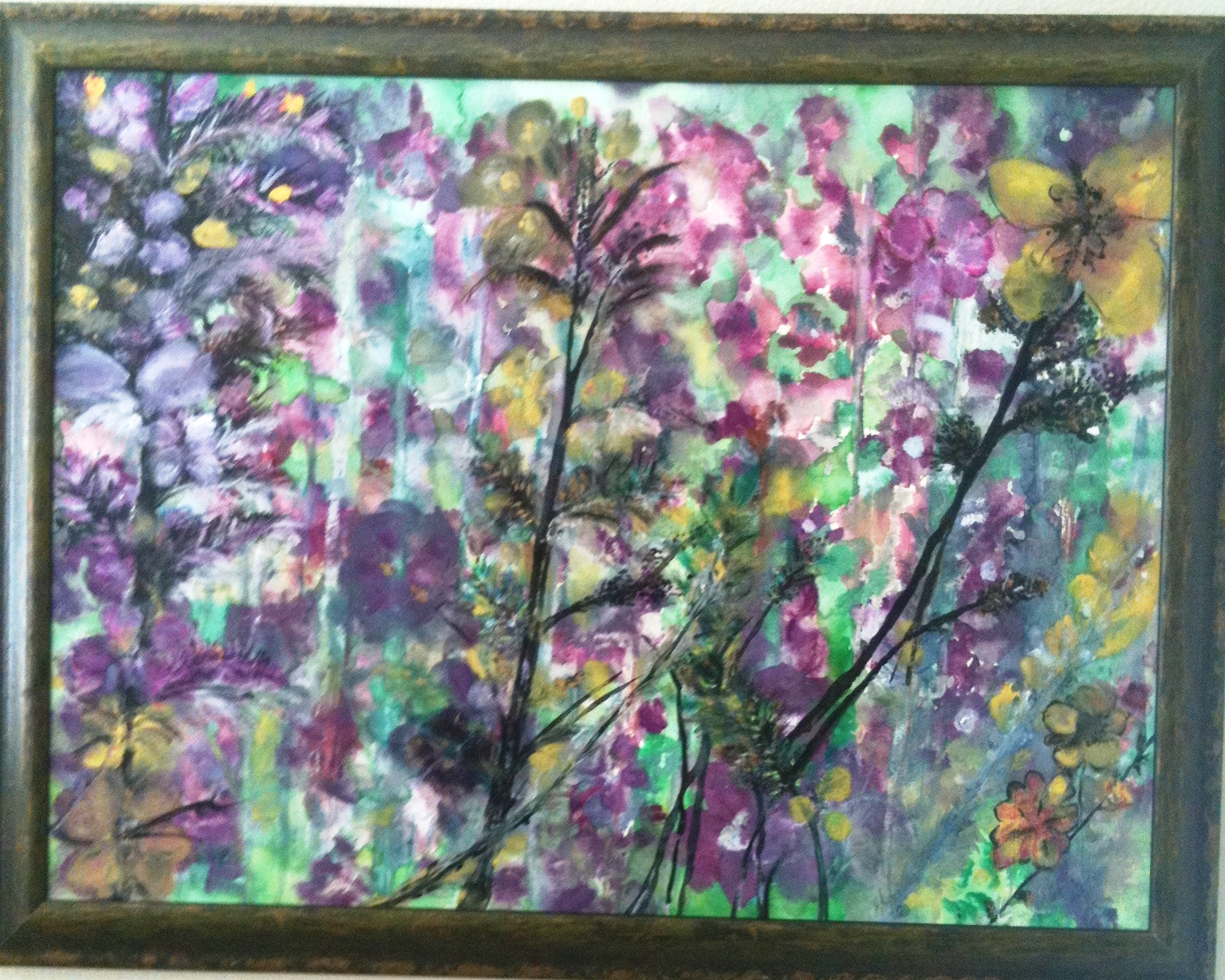 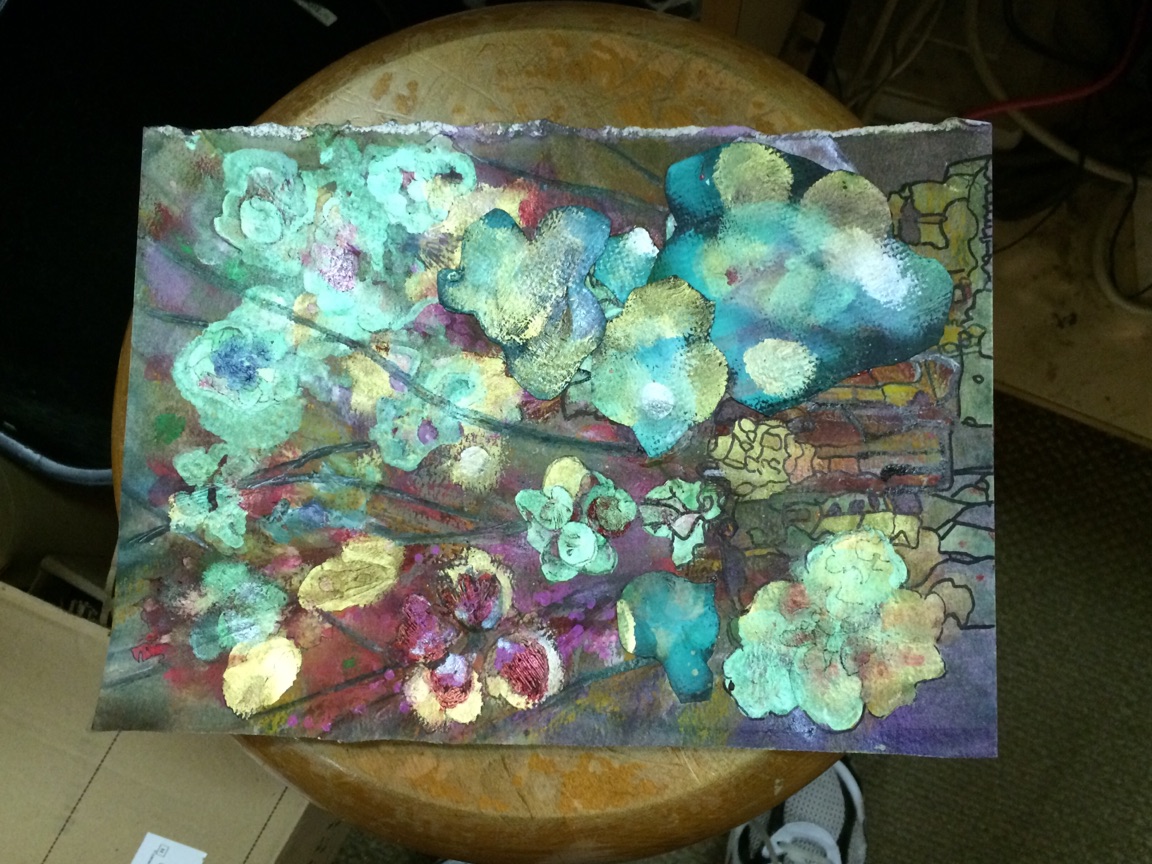