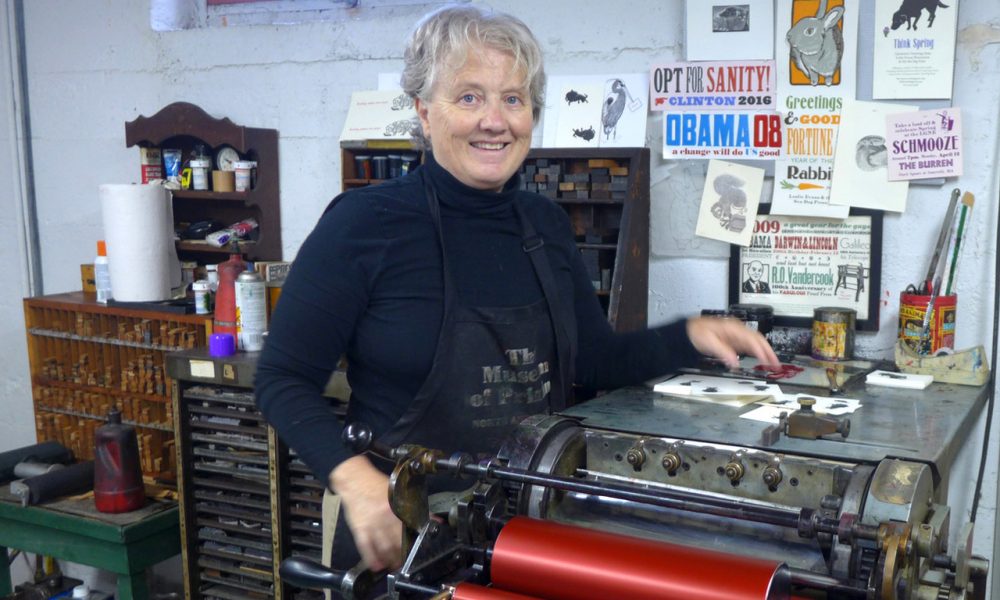 Today we’d like to introduce you to Leslie Evans.

Leslie, let’s start with your story. We’d love to hear how you got started and how the journey has been so far.
I have always loved to draw, a preoccupation/obsession that eventually led me to Rhode Island School of Design for college. I majored in printmaking, although the medium I eventually favored, relief printmaking, wasn’t an official part of the program at that time. I did take an elective typography course where I was introduced to letterpress printing on the Vandercook proof press, used mainly for proofing type. On my own initiative I also printed woodcuts and film society posters on the press. After graduation I was pleased to find employment (as were no doubt my parents) in printmaking as a designer and printer of silkscreen posters advertising concerts, films, and theatre presentations at the Hopkins Center at Dartmouth College. That was a fantastic experience, and it also afforded me the opportunity, after I left the job, to study with Ray Nash, an esteemed retired Dartmouth College Graphic Arts professor, at his Summer Book Arts workshop at his farm in Vermont. The month-long workshop combined lessons in the history of the book from Nash’s extensive library in the mornings as well as hands-on printing in the barn pressroom in the afternoons. It was an experience that clinched my decision to one day have my own letterpress studio.

Soon thereafter I landed in Boston and after working for a year as an art director at a design studio was laid off during the recession. I then decided to try to make a go of it as a freelance illustrator and begin assembling my letterpress shop. The early 80s was a great time to find old printing equipment as many shops were closing or changing over to photo typography and offset printing. I found my Vandercook proof press from a Linotype operator who was switching to photo typography. Around the same time I was one of the founding members of the Letterpress Guild of New England which became a great networking group for letterpress printers and aficionados.

When I first opened my shop I mainly worked on personal projects and birth announcements for the flurry of my nieces born at that time (I am currently printing their offspring’s birth announcements). I love architectural ornamentation and sculpture so I organized a hunting expedition with friends to find lion sculptures around the Boston area. That walkabout resulted in my first calendar, Lions of Boston. I have subsequently published calendars of Boston beasts, bridges, boathouses, a Gardner Museum menagerie, and eastern New England diners. My nameless press finally acquired a moniker, Sea Dog Press, when I got my lab mix dog, Morgan. Her nickname in Welsh is Morgi which literally means sea dog, (although in Wales it is the name for a dogfish.) I was inclined to get a Labrador retriever after seeing Edward Gorey’s book, A Sopping Thursday, which featured long legged labs sporting umbrellas. I loved the graphic look of the dogs, but was lucky in retrospect to arbitrarily pick a very agreeable and good-natured breed for a pet. During a book arts class I was taking at Radcliffe I came up with Black Morgan, A Labrador Alphabet for a class assignment. I eventually printed the alphabet as an offset poster.

As an illustrator, I worked in a variety of media, and gradually incorporated my printmaking background into some of my jobs. I did a monthly linocut print for a Horticulture Magazine column while also painting a watercolor illustration for the monthly Cornell Veterinary Dogwatch newsletter. I began illustrating children’s books and after two watercolor Alphabet books, I did a series of four seasonal books with hand-colored linoleum block prints beginning with Autumn, An Alphabet Acrostic (by Steven Schnur) for Clarion Books. This led to a series of more experimental block prints incorporating hand-brayering, collage and digital effects for Leaf Jumpers and two subsequent books, Winter Trees and Spring Blossoms, for Charlesbridge Publishing.

Great, so let’s dig a little deeper into the story – has it been an easy path overall and if not, what were the challenges you’ve had to overcome?
Being a self-employed artist is rarely an easy path. You need to be a relentless self-promoter unless you decide to hire a representative agent to sell your work. My situation was unusual in that I had access to my own in-house press to promote my work. I took the opportunity to send out hand-printed holiday cards & lunar New Year’s greetings or just about anything that struck my fancy. Some of these designs evolved into my offset Sea Dog Press greeting card line as well as licensed designs for cards published by Artists to Watch and Trader Joe’s. It is important to look for other outlets for your work as you never know where your designs may end up. My Labrador Alphabet conceived in a class became an address book published by Stewart, Tabori and Chang. Also illustrating in different media has allowed me to work for companies that might not want a relief print-based look. I continue to enjoy learning new techniques, especially wood engraving at annual workshops with the Wood Engravers’ Network.

Please tell us about Leslie Evans Illustration and the Sea Dog Press.
My business is listed as Leslie Evans Illustration and the Sea Dog Press. My primary work is as an illustrator for various advertising, exhibition, and publishing companies. My recent work includes illustrations for a Maryland National Park exhibit, a watercolor map for a children’s tour of Mt. Auburn cemetery and a lino block/wood type logo for the Watertown Farmers’ Market. Although I don’t work regularly as a job printer, I do occasionally take on printing jobs where I can have creative input as an artist/printmaker. My press is hand cranked so is not a high production press but I am able to print up to 200 copies of custom designed posters, invitations and announcements. Since the November election I have become active in printing posters and postcards for political action initiatives. With the local Watertown group, ReThink Plastic, I was involved in advocating for the recent Watertown Bring your own Bag ordinance in designing logos and brochures promoting the single-use plastic bag ban. I am currently revising a Resource Welcome Guide and map for immigrants to Watertown published through the organization, World in Watertown. I also plan on publishing a series of posters in the coming years for causes dear to my heart including the environment and animal rights.


What’s your favorite memory from childhood?
I was lucky to attend wonderful figure drawing classes at a community center on Wednesday afternoons while I was in high school. The teacher, Robert Rathbun, was very important in my development as an artist and I eagerly looked forward to those weekly sessions. I also spent an inspiring summer in London with my family between my junior and senior years in high school. Growing up in the suburbs, this was my first opportunity to live in a thriving city. I loved its beautiful parks, varied museums, amazing historical venues and just the general wonderful ambiance of the place. That experience greatly influenced my choice to eventually live in the Boston area.