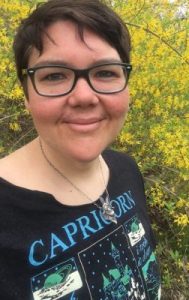 Today we’d like to introduce you to Laura Campagna.

Laura, please share your story with us. How did you get to where you are today?
I grew up in Brookline, where my family has lived since they immigrated from Italy and Ireland generations ago, and was exposed to Egyptian, Greek, and Roman mythology in school. I was obsessed with the ancient Goddesses and Gods and used to buy books about them with my own money. We also studied the Salem witch trials so I had a sense from very early on that witches were real and that they were so powerful as to be dangerous. They were the Nasty Women of the 17 Century.

My mom was kind of a hippie in the 70s and had astrology and New Age books around the house. I got into them at 13 and bought a deck of tarot cards at Trident Cafe on Newbury Street. When I got my license I used to drive my friends up to Larz Anderson Park and give them tarot card readings. One of them said, “You’re just making stuff up.” In some ways she was right. I was instinctively reading from intuition. I’ve always been very sensitive, what people would call emphatic now, but at the time I didn’t trust it and felt like a fake. So I started to study tarot books.

Whenever I was given a choice in school, I chose to study magic: my senior project at Brookline High was on Faeries in Irish Folk Lore; I went to Antioch College in Ohio because they had a Women’s Studies in Europe program, and I wanted to research the effects of the witch burnings on the modern pagan community. After graduation, I moved to NYC to do human rights work. One day, I got a tarot card reading from a witch at a local bookstore, and began studying Wicca with her.

After 9/11, I got depressed and moved to Portland, OR, to do a herbal medicine apprenticeship at Collett Gardiner’s Blue Iris Mystery School. Eventually, I moved to San Francisco and took Wicca classes with the Reclaiming Tradition, which has a strong social justice focus. My spirituality is the root of how I live in the world. I believe all life is sacred, every living thing. Therefore, humans have a spiritual imperative not to pollute the Earth, abuse animals and exploit and kill people.

All souls come to Earth to develop and contribute. The fact that we live in a society where people cause harm for profit is part of what we as a collective need to learn to correct. It is not necessary for our survival and is actually putting all life in peril.

I received my MFA in Creative Writing from Emerson College and spent time teaching at Prescott College in Arizona. I moved back to Boston unexpectedly a few years ago and was once having a bad bout with insomnia and anxiety. I knew reiki helped and I began taking classes. I became a Reiki master and then found my way to VortexHealing® Divine Energy Healing in the Merlin Lineage. VortexHealing®not only alleviates symptoms but is effective in addressing the underlying cause of issues. I’ve been taking classes for the past several years and my life has transformed.

When I first moved back and was living in Jamaica Plain, one of my good friends was going through a divorce and I started giving her astrology and tarot readings regularly.

She began referring her friends to me. I said, “I don’t want to give readings to strangers,” and she said, “They’ll pay.” That was the start of my business. It’s been over three years and things have grown organically, but it was always a part-time thing. I was working at the Harvard School of Public Health on a global reproductive health project, trying to finish my novel, and doing this in my free time.

Eventually, I said, I will never finish my book unless I commit to it, and I wanted to see what was possible with the astrology, tarot, and energy healing work. It was a big leap to go out on my own. It felt risky and scary, but the joy of living my true calling, prioritizing art and magic in my life, it’s like nothing I’ve ever known.

Great, so let’s dig a little deeper into the story – has it been an easy path overall and if not, what were the challenges you’ve had to overcome?
Being an empath and an intuitive is difficult. Your senses are heightened and you get bombarded with so much information all the time, often directly in your body. It’s overwhelming and makes you want to shut down or find ways to numb out.

Unfortunately, we don’t have a Hogwarts where little kids with subtle gifts can go to develop their talents. I wish a pigeon had delivered a letter telling me to pack my bags because it was time to go live with the wizards and witches, but that didn’t happen. The road was not clear, but I found them anyway.

Energy healing has saved my life because it helped me release trauma from the past and treat my anxiety, depression, and insomnia without drugs. It also fine tunes the system so now I can use my sensitivity in my work to help people. But it’s a daily practice. I will always be very affected by my surroundings, and right now there is a lot of fear and anxiety swirling about.

I think many people are being called to the healing road because of it. I give myself a healing almost every night and I feel so much better when I do. If I miss a couple of days I feel it immediately. Energy healing is the most effective way I’ve found to show up as my best self in the world.

I actually believe that all people are psychic and we are communicating telepathically all the time with each other, animals, plants, etc. Younger generations, like the Millennials, are much more in touch with this, and interest in the occult is on the rise. It’s exciting to be in the midst of a revival of ancient traditions that are transforming the cultural landscape around spirituality. We’re in the midst of a political crisis, and a lot of people are turning inward to connect with something bigger than themselves.

One of the reasons I believe astrology is increasing in popularity is because it’s comforting to understand the correlation between planetary movements in the sky and the corresponding archetypal phenomenon on earth. It reminds us we are part of something larger. We all have our important roles to play on Earth, but the cosmos provides great perspective.

Please tell us about Laura Campagna Astrology, Tarot, & Energy Healing.
I am an astrologer, tarot card reader, and energy healer. I post horoscopes on the astrological weather several times a week on Instagram and write a monthly astrological newsletter for my clients that is available on my website.

My most popular service is the Double Woo reading, which incorporates both astrology and tarot. I’ve been hired to read tarot and astrology for corporate events, parties, and even a high school post-graduation all-night celebration. The group events are so fun, but with the individual sessions, you can go deeper so I love doing it all.

Lots of people come to me with specific questions while others just want a general overview. Divination offers a framework for understanding the challenges and blessings of our lives. Yes, things are hard right now, but this too shall pass. Or, you have great energy coming into this area for the next six weeks–go for what you want!

In addition to VortexHealing®sessions with individual clients, I also do magical work such as house clearings and blessings, which is lovely for both the place and the people. I am currently developing a line of magically infused astrologically informed room and body sprays to give an energetic boost to your self or space. And starting in the fall I will be offering intuitive tarot workshops.

Do you look back particularly fondly on any memories from childhood?
Halloween was my favorite holiday and I would always dress up as either a black cat or a witch. A witch was what I really wanted to be when I grew up. I used to make spells and potions with my friends and felt very connected to the natural world. Kids instinctively believe in magic, it’s part of what makes them so cool.

I believed in fairies, that the wind talked to me, and that the water was full of danger and treasure. Swimming and pretending I was a mermaid or running down a big hill shouting at the sky are some of my happiest memories from childhood and when I felt most alive. It felt like the water and the air was talking back to me. I believe they were. They still do. 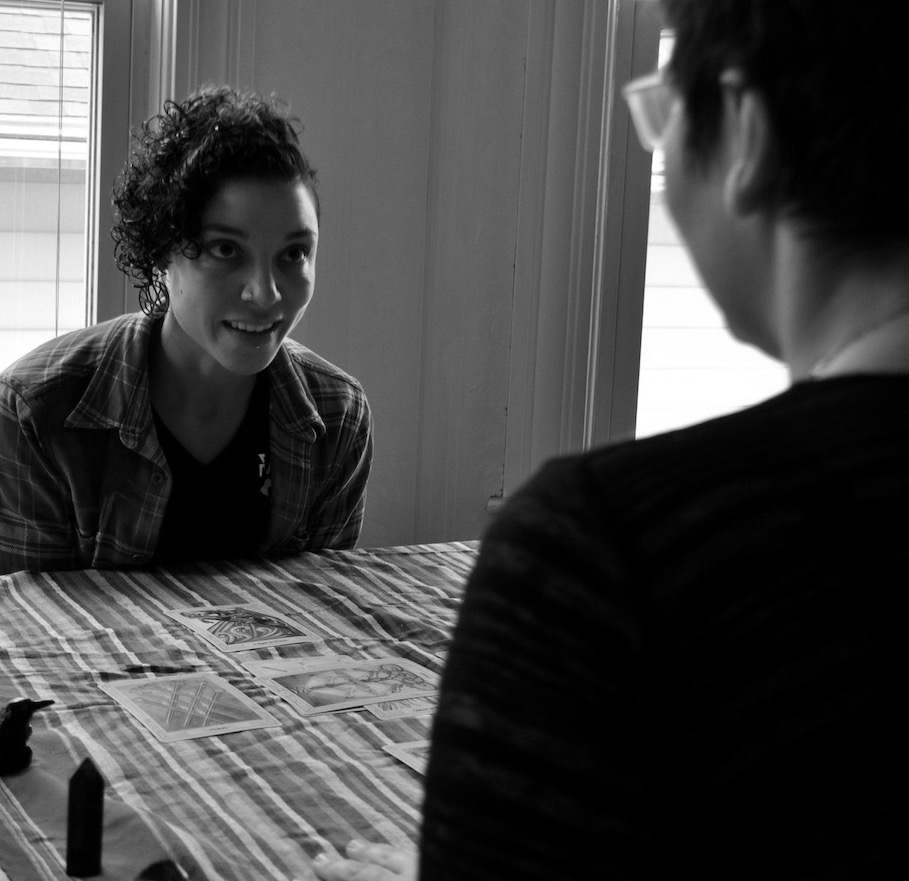 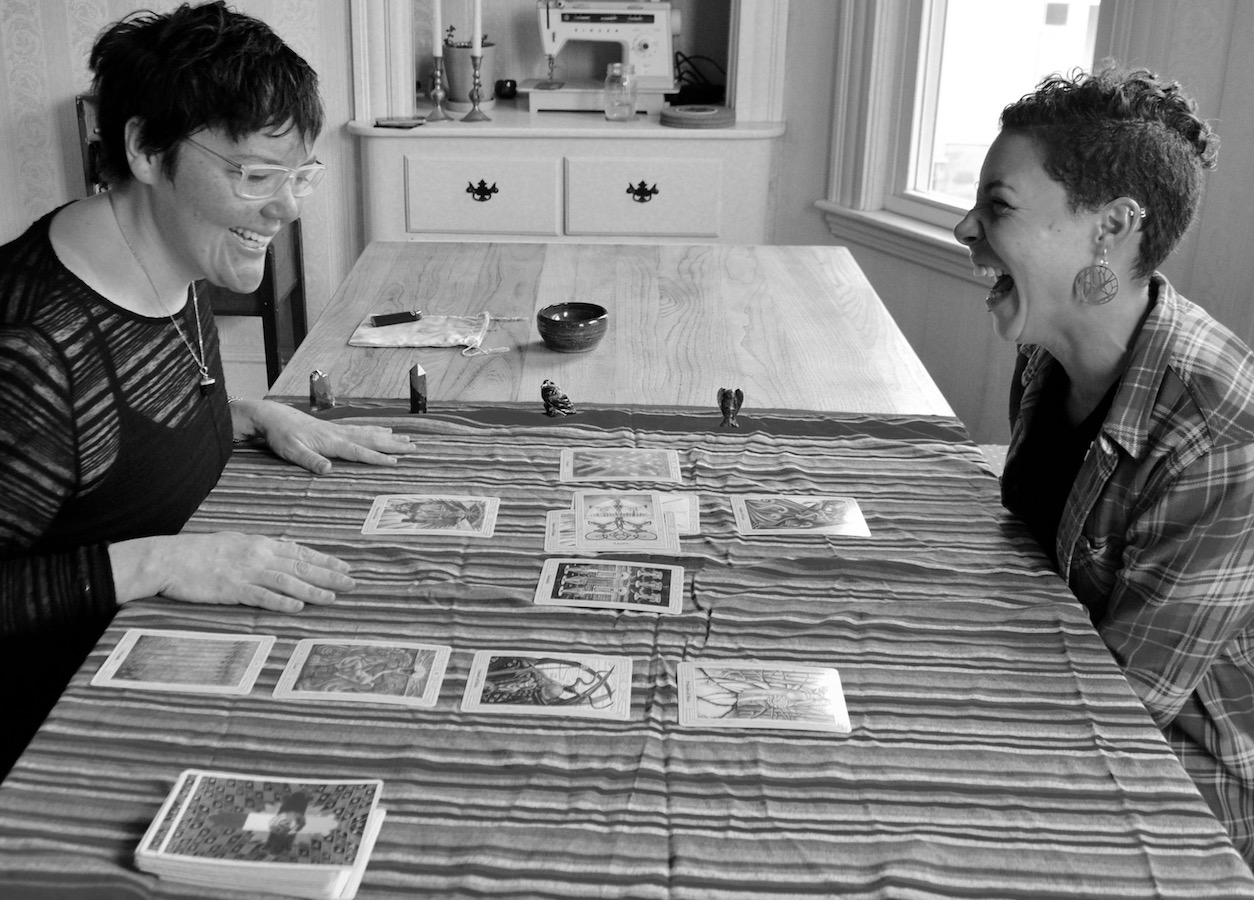 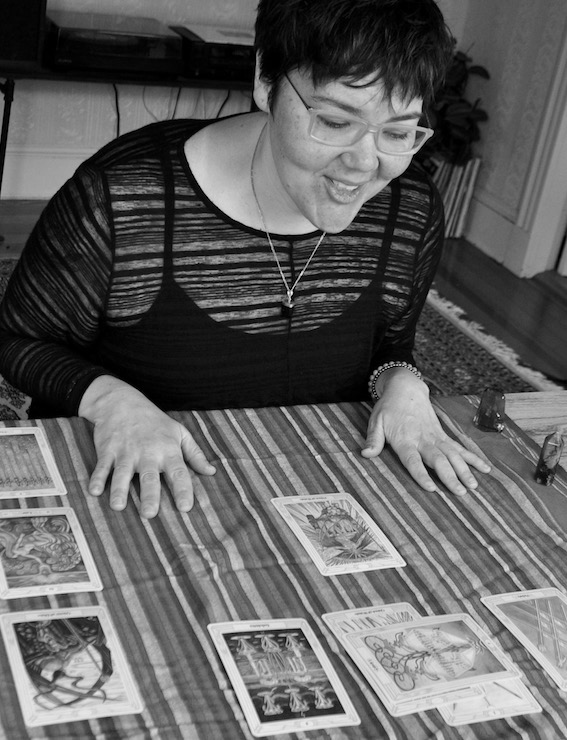 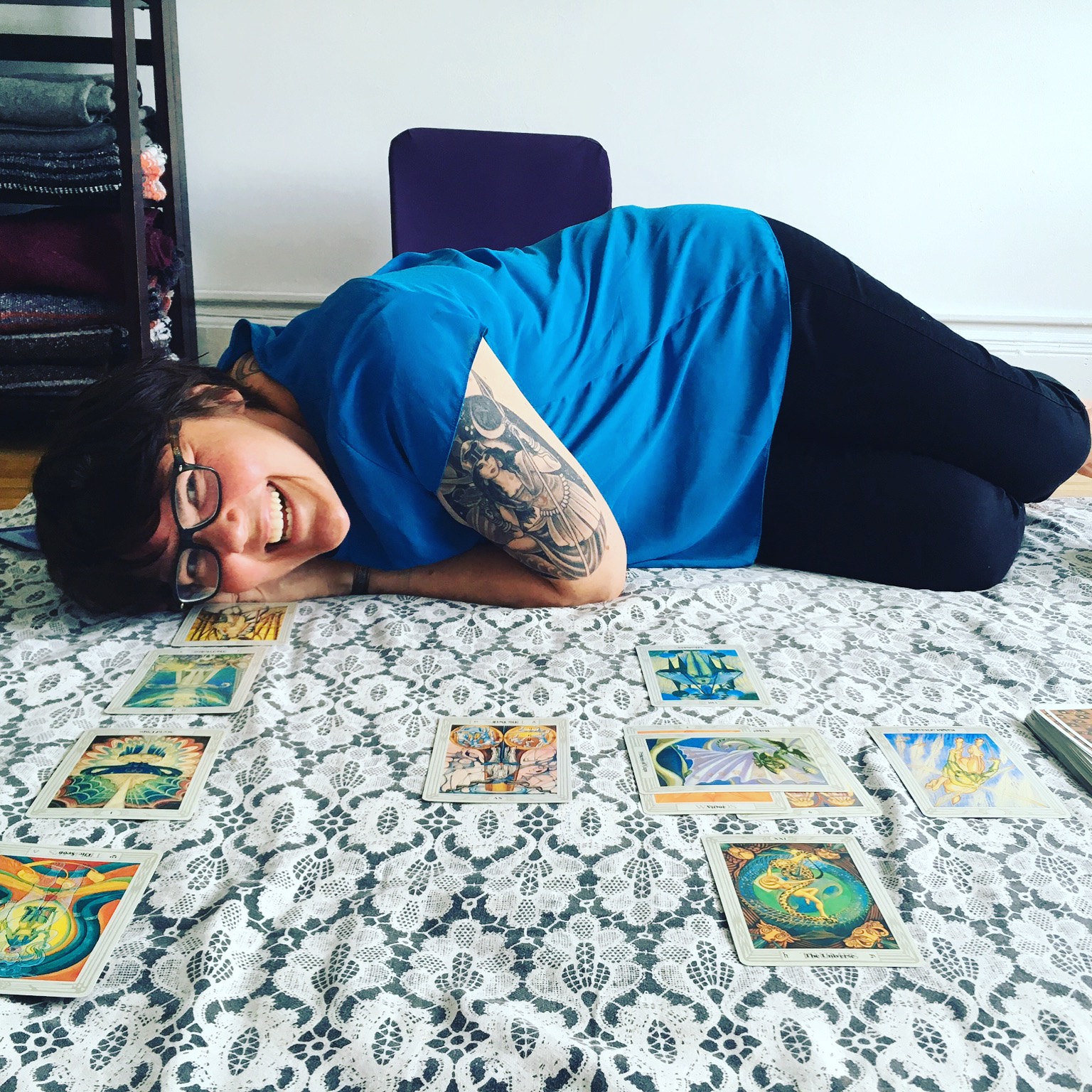 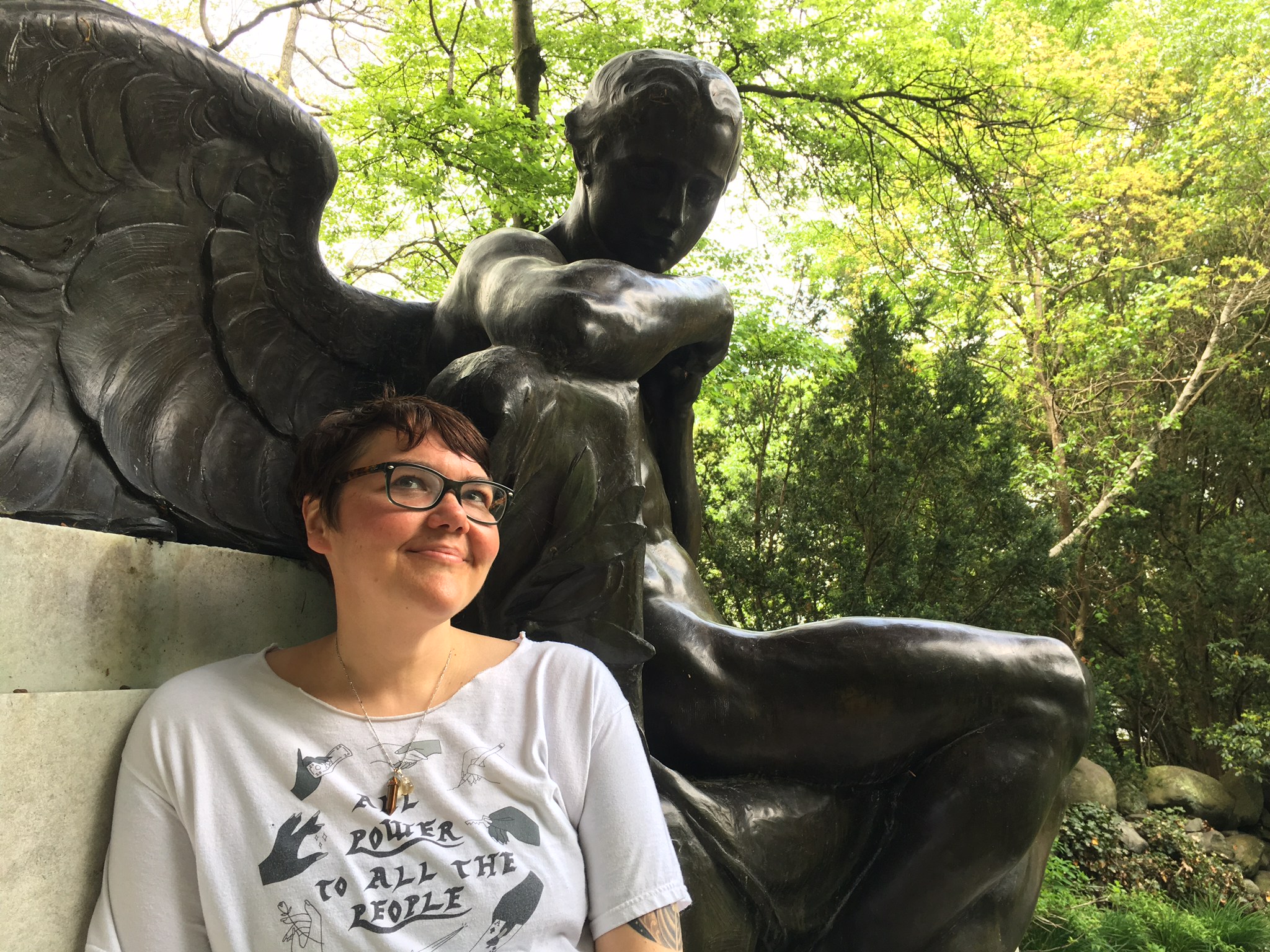