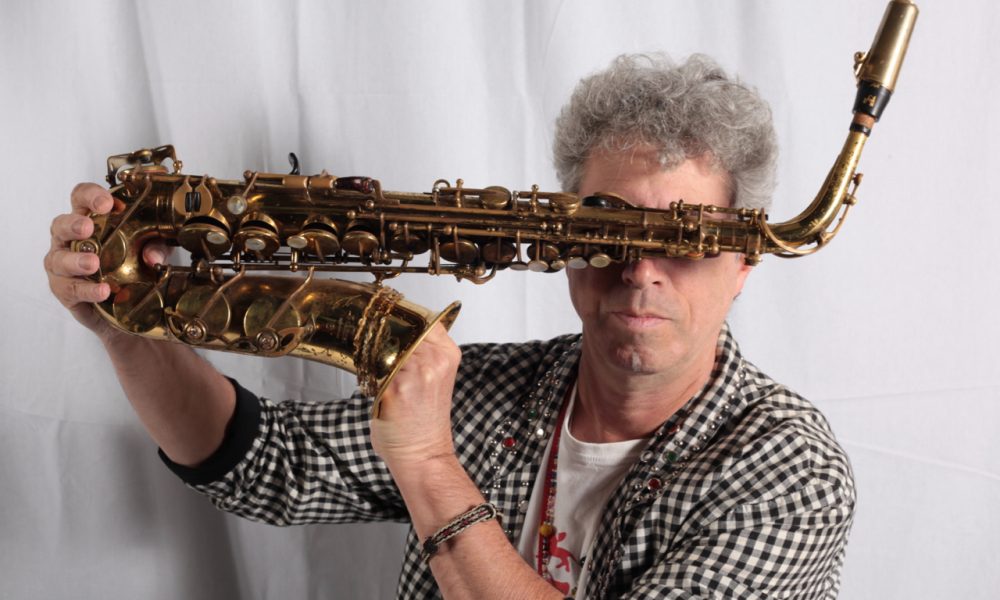 Today we’d like to introduce you to Ken Field.

So, before we jump into specific questions about the business, why don’t you give us some details about you and your story.
I had played clarinet since 4th grade, but I really was only able to translate written notes on paper to a fingering on the instrument; I had no concept of creating music myself. I was encouraged as a clarinetist both at home and at school, and I had a very good private teacher. I showed some aptitude for the instrument, and I liked to practice. I originally studied computer science in college. I didn’t study music outside of a few basic survey and introductory theory classes.

In college, I managed to run into a door (don’t ask…) and broke my front tooth. I could not play clarinet, so I borrowed my sister’s flute and started improvising with folk and blues musicians. I think the combination of creating music myself improvisationally, and seeing the inner need I apparently had to continue to do music despite the physical setback, made it clear that I was a musician, though not a very good one at that point.

After many years playing flute, and then saxophone (which is much less stressful on my broken tooth than clarinet) in the context of a “sideman”, I started improvising and composing music as soundtracks to my late wife Karen Aqua’s animated films. One piece that I wrote for a Boston First Night animation/slide installation was very well received, and I even got requests from people I didn’t know for copies of the music. This got me thinking, and I decided to try to put together a CD of my own music. A series of serendipitous events led to the recording of my first solo CD “Subterranea” in an underground room in Roswell, New Mexico. I submitted this CD to the Ucross Foundation in Wyoming, and they awarded me a one-month Composer-in-Residence grant. It was only at this point that I really started thinking of myself as a composer.

Somewhere in there, I studied saxophone performance for four semesters at Berklee College of Music, and improvisation privately with Charlie Banacos and Jerry Bergonzi.

I couldn’t have dreamed of any better situation than what I now have, doing music full-time, performing actively, having my music for Sesame Street heard by millions of kids, and getting very kind critical response to my solo and group work.

I am currently a saxophonist, flautist, and composer. Since 1988 I have been a member of the internationally acclaimed electrified modern music ensemble Birdsongs of the Mesozoic, with whom I have recorded eight CDs. I was named a 2017 Finalist in Music Composition by the Massachusetts Cultural Council.

I lead the Revolutionary Snake Ensemble, a New Orleans-inspired improvisational brass band. Year of the Snake, the group’s 2003 debut, was included on best-of-year lists in NYC, New Orleans, and Milan. Our 2008 release Forked Tongue spent 2 months on the CMJ North American jazz top 20 chart, and appeared on best-of-year lists in the Village Voice and in Georgia, Kansas, Wisconsin, Massachusetts, NYC, and Estonia. Live Snakes (2014) was an Editor’s Pick in Downbeat Magazine. Labeled “explosive” by the Boston Globe, RSE’s latest release I Want That Sound! (2016) “is a strong example of how Ken Field and the Revolutionary Snake Ensemble continue to push the brass band tradition forward in an entirely original way” (NYC Jazz Record). The group has performed at Kennedy Center for the Performing Arts, the Brooklyn Academy of Music, the Museum of Fine Arts (Boston), Berklee Performance Center, the Redentore Festival in Venice, Italy, and numerous other venues, and has been nominated for a New England Music Award, a Boston Music Award, and several Boston Phoenix/WFNX Best Music Poll awards.

I have performed in the US, Canada, Mexico, France, Germany, Spain, Hungary, Portugal, Sweden, Ireland, Italy, Poland, Australia, New Zealand, & Japan, and have been awarded residency fellowship grants at the MacDowell Colony (NH), the Ucross Foundation (Wyoming), the Fundación Valparaíso (Spain), the MacNamara Foundation (ME), PlatteForum (CO), and the Atlantic Center for the Arts (Florida). My musical projects have been featured in The New York Times, Saxophone Journal, The Boston Globe, The Los Angeles Times, The Washington Post, Tower Pulse, Billboard, Cadence, The Wire, The Orlando Sentinel, and many other publications. I have performed at the Roswell (NM) Jazz Festival, for President Bill Clinton, with Trombone Shorty, Charles Neville, Saskia Laroo, Grammy-winning percussionist Glen Velez, former J. Geils frontman Peter Wolf, the Jazz Composers Alliance Orchestra, and the Georgia Symphony Orchestra.

I was commissioned by Guggenheim fellows Bridgman/Packer Dance to compose music for their works Under the Skin and Double Expose, which have been performed widely in the USA and Europe. A CD of Under the Skin was released in 2006 on Innova Recordings. Also on Innova, my 2012 release Sensorium: Music for Dance & Film includes my music for Double Expose and for three films by my late wife, internationally recognized animator Karen Aqua.

In 2000, I released the critically acclaimed Tokyo in F, a live recording of an improvised concert I gave in Tokyo with three prominent Japanese musicians I met only just before the performance.

The CD includes two of my compositions for Sesame Street, and features guest appearances by saxophonists Jessica Lurie & Amy Denio.

My 1996 debut solo release, Subterranea, documented my multitracked saxophone improvisations, recorded mostly in an underground chamber in Roswell, New Mexico. Subterranea received airplay on over 160 radio stations in the US, Canada, Switzerland, and Japan.

My music is heard regularly on the popular internationally-broadcast children’s television program Sesame Street, in collaboration with animation by Karen Aqua. My soundtrack work has been broadcast on HBO, the Movie Channel, the Sundance Channel, and PBS.

The Saxophone Journal featured my Masterclass CD based on the layered saxophone improvisations from my first solo CD. I am an Applied Microphone Technology Endorser & a Vandoren Performing Artist. I host The New Edge, a weekly radio program on WMBR in Cambridge, am former Chair of the Cambridge Bicycle Committee, a member of the HONK! Organizing Committee, and am on the Boards of Tutoring Plus of Cambridge and JazzBoston.

Great, so let’s dig a little deeper into the story – has it been an easy path overall and if not, what were the challenges you’ve had to overcome?
The road of a creative artist or musician is always bumpy, and it is hard to reveal your innermost emotions to the public through your work. But it is the most rewarding path I think I could have chosen.

NYC Jazz Record writes that “Revolutionary Snake Ensemble has been putting its unique and somewhat twisted twist on the New Orleans brass band tradition for more than 25 years…hard-partying avant-funk, with boisterous soloing…I Want That Sound! is a strong example of how Ken Field and the Revolutionary Snake Ensemble continue to push the brass band tradition forward in an entirely original way, all the while making music that’s a heck of a lot of fun.”

KBCS Seattle Public Radio says that RSE “continues to mine the vein of New Orleans – with post-bop, and touches of Avant – this band cooks; edgy, raucous, fun, and first rate!”

And the Boston Herald adds that “People tend to think of second line bands – brass bands steeped in New Orleans traditions – as instant party starters. It’s a great compliment, maybe the best compliment ever, but it limits the sonic and emotional range of these bands. Revolutionary Snake Ensemble can absolutely get a party started. But on the local horn collective’s fourth album, I Want That Sound! the players also explore the wild outerlands of jazz.

Their 3rd release, Live Snakes (Accurate 2014), was recorded in 2011 & 2013 in Boston, Brooklyn, and Manhattan, and documents four distinct incarnations of the ensemble, with two remixes by Field, and with guest musicians including Charles Neville, Josh Roseman, Kenny Wollesen, and Matt Darriau. With sold out CD release performances at Boston’s Regattabar, at Barbes in NYC, and at Kennedy Center in Washington, D.C., the CD broke into the top 10 on the CMJ jazz chart in its 2nd week out, and was an Editor’s Pick in Downbeat Magazine.

The group’s 2nd CD, Forked Tongue (2008), spent 2 months on the CMJ North American jazz top 20 chart, peaking at #11, and appeared on best-of-2008 lists in the Village Voice & in Estonia, plus in Georgia, Wisconsin, Kansas, Michigan, Massachusetts, Ohio, and NY. The disc features unique treatments of music by Field, Ornette Coleman, Billy Idol, and others.

From 2005-2009 the Snake Ensemble traveled by train five times from Boston to New Orleans, playing on board the Amtrak Crescent, to march with the Krewe of Muses in their annual Mardi Gras parade. The Ensemble can be heard on Parade of Numbers, an animated counting piece regularly aired on the television program Sesame Street.

RSE’s debut release, Year of the Snake (2003), included music by Field, Sun Ra, John Scofield, James Brown, and others, and was listed as one of the top discs of the year on New York NPR affiliate WNYC, in the New Orleans Gambit Weekly, and on Radio Popolare in Milan, Italy.

What moment in your career do you look back most fondly on?
I was honored to have been chosen to receive a Finalist award in Music Composition by the Massachusetts Cultural Council. But I think I was even more honored when my group Revolutionary Snake Ensemble was performing in New Orleans and was assumed by most to be a New Orleans-based group!