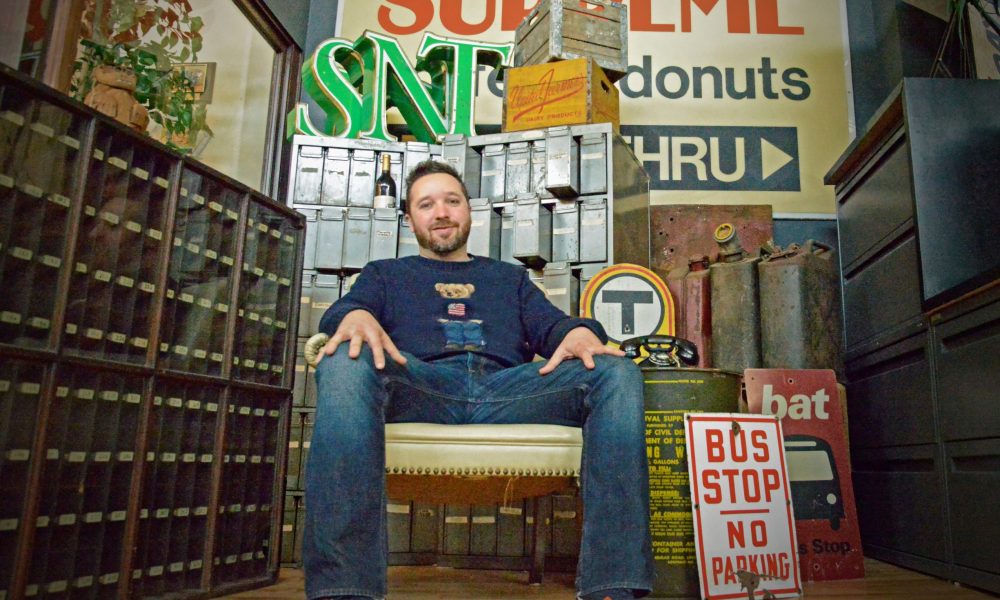 Today we’d like to introduce you to Joe Lyons.

Thanks for sharing your story with us Joe. So, let’s start at the beginning and we can move on from there.
In late 2001 I was laid off from my first graphic design position during the early phases of the 9/11 recession. I was very new in the industry and there were a lot of laid off designers fighting for the few available positions in Boston. I decided that I may have better luck working as an independent designer, working for myself. I fortunately landed a design contract with a major construction products company in Cambridge and shortly thereafter filed incorporation papers for Spin350 Media, which I later changed to Spin350 Creative. I spent the new few years building up additional clients, marketing myself and expanding the scope of my design skills and offerings. Before long, I was so busy that I started farming work out to other freelancers.

In 2010, after working out of my home for years, I had a once in a lifetime opportunity to buy commercially-zoned studio space in Hyde Park and it was the perfect opportunity to open my own design studio. I now had a business location for Spin350 and could separate work and home. It also gave me the chance to look at where Spin350 would go moving forward.

Great, so let’s dig a little deeper into the story – has it been an easy path overall and if not, what were the challenges you’ve had to overcome?
As mentioned, in the early years of Spin350, I was running the business out of my apartment and meeting clients at coffee shops. It was a challenge to present myself as a professional business when I didn’t have studio space outside of my home, and I think that definitely held me back from being able acquire bigger/better clients. The first few years were designing a lot of club flyers, business cards, etc. Once I opened the Spin350 studio, it was easier to start charging market rate. As a result, my client base quickly improved and my work became so much more exciting and rewarding.

Another big challenge was that when I opened the studio, I felt a necessity to build an in-house team out of the external freelancers that I had been working with. I quickly discovered though, that having in-house employees was a lot different from farming work out and it meant my job was no longer full time designer, but instead, a business owner that managed people all day. I didn’t feel fulfilled managing a staff, and that was not the course that I wanted to stay. In 2013, I went through some staffing changes and it was the perfect opportunity to return to an independent model where I was able to be the core face of Spin350 once again. This allowed me to creatively quality control every project again and work directly with my clients again. Much like when I bought the studio space in 2010, this was the next big phase for Spin350.

Alright – so let’s talk business. Tell us about Spin350 Creative – what should we know?
I like to think that Spin350 is not your typical design studio. The core work that I do is brand development (creating logos and brand guides) and graphic design (brochures, campaigns, tradeshow graphics, etc.), but the mix of project work that I do has a broad range across multiple mediums and industries. At any given time, I may be designing a logo, developing the look and feel of a web site, and redesigning a marketing department’s collateral. I am most known for my branding work, which can be seen across Boston, but clients come to me for so much more. Last summer, Harvard approached me to redesign their lobby at the Middle East Initiative. That was such a fun project because I needed to learn about Islamic geometric patterns and turn my designs into a 7 foot wood carved wall structure. Every time someone comes to me with a design challenge, I get excited at the chance to solve it!

When thinking about the moments that I’ve been the most proud of over the years, it is difficult to choose just one. Buying commercial space in Hyde Park and building the Spin350 studio was huge for me and once I put that Spin350 logo on the wall, I think it really sunk in. That same year, I was honored to be a recipient of a Boston Main Streets Business of the Year award, which was presented by the late great Mayor Menino. In 2013, I was part of the design team that pulled off “Boston Bites Back” at Fenway Park, which raised a million dollars in one night for the victims of the Boston Marathon bombings. Being in Fenway with the survivors and seeing Spin350 on the jumbotron was something that I’ll never forget.

Is there a characteristic or quality that you feel is essential to success?
When someone hires me, they are hiring a design partner, not a vendor. I am going to meet with you (either at Spin350 or at your office) and we are going to do a discovery session, so that I have a solid understanding up front of what your company does, what your needs are and how we can get to your goals together. Too many graphic designers jump right in to design and focus on making something that looks good, but they don’t take the time to understand the goals of the design. Every company is different and every company has different needs. They also have different audiences and targets. My job is to design something that your audience will respond to.