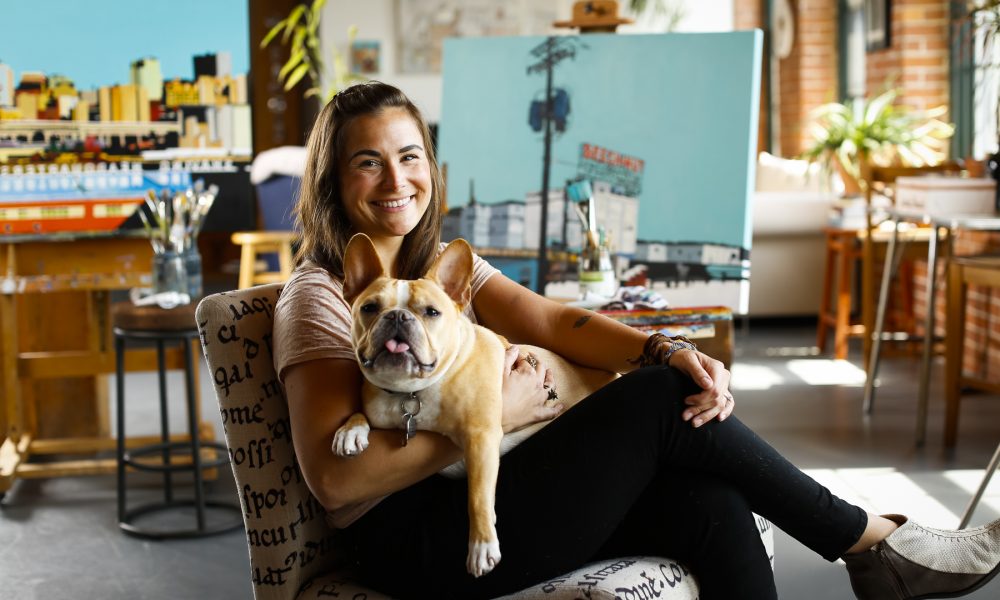 Today we’d like to introduce you to Jodie Baehre.

So, before we jump into specific questions about the business, why don’t you give us some details about you and your story.
I grew up in Buffalo, NY. My father, now retired, was an art teacher and the main reason I became an artist. He came from a poor home, the only child of six in his family to go to college. He took me to museums and arts shows when I was young, enrolled me in art classes and was genuinely a very creative and imaginative person that made an enormous impact in my life. He taught me that if I worked hard and I wanted it enough then, I could have the moon.

Inheriting my father’s talent and his love for art, I studied industrial design at the Rochester Institute of Technology, NY; printmaking and painting at The Art Institute of Boston, MA and The Lorenzo De Medici school in Florence, Italy; and art administration at Boston University, MA. I began painting semi-professionally in 2006, supporting myself in the restaurant industry while painting and attending grad school at night.

It was around this time, that I began a non-profit 501C3 organization with a friend. We called this new adventure Glovebox and it sought to bring artists and the community together through exhibitions, film, workshops and collaborative projects. Glovebox (2007-2016) was very important to the artists and filmmakers we worked with. We hosted over 30 art exhibits with Boston artists. The organization was most noted for our short film and animation festivals that received international acclaim as the “next Sundance for art films.” Many of the artists who submitted have gone on to become today’s new leading filmmakers and animators, including Reinaldo Green whose film, “Stone Cars” was featured on HBO. Another short animation, Mr. Hublot, won an academy award. The ten years that Glovebox was part of my life and the lives of many Boston artists was an extraordinary time. As sometimes these things naturally end, so did Glovebox. Looking back, I cannot believe I was taking on SO much but it was the community of artists that made Glovebox a success.

In 2011, I took a full-time position at a museum after grad school, pulling the 40-hour a work week and completely checking out on my own personal artwork. I was unhappy. I had all this education, Glovebox under my wing and my parents were very proud of all that I had achieved. Not creating was killing my soul. I took a leap of faith, with support from my incredible husband and quit my job to pursue my art. Being an artist, is ultimately about taking risks and this was a big one for my family and I. If it didn’t work out, we could not pay our bills. My husband and I moved into an artist live/work space and I lived the artist life style: work hard, play hard, cry myself to sleep and wonder what I got myself into, jump for joy at commissions and sales, wonder if I am any good, secretly envy other artists who got large grants or huge commissions, etc. It was a big growth period and many ups and downs but I knew, I was happy. I was trying. I was reaching for the moon.

I put in the time, became invested in my community of artists, networked like crazy and kept painting. Fast forward to today and I am extremely grateful to have taken the risk. I am a successful artist and I really love what I do. I’ve been several exhibitions including Ambassadors 2 at Boston City Hall and The Big Picture at Atlantic Wharf Gallery. My work is on permanent reserve at the Boston Public Library, permanent exhibit at Factory 63, Harvard University, Massachusetts General Hospital, and I have three works in State Street Bank’s permanent art collection. My paintings have been featured in Boston Magazine, The Weekly Dig, Daily Artspace, Bezar, The Boston Globe and Apartment Therapy. In 2015, I was nominated for the prestigious Brother Thomas Fellowship through the Boston Foundation and in 2016 my husband and I bought a home in Dorchester. One of the rooms in our house is my studio and now, I’m focusing many of my urban landscape paintings on this area of Boston. It will always be a struggle, always ups and downs, but that makes it exciting.

Great art is the outward expression of an inner life in the artist and this inner life will result in his personal vision of the world… the inner life of a human being is a vast and varied realm. – Edward Hopper

We’re always bombarded by how great it is to pursue your passion, etc. – but we’ve spoken with enough people to know that it’s not always easy. Overall, would you say things have been easy for you?
Art is always about taking risks. Some of those risks pan out and some don’t. It is really like everything else in life, you just have to pick yourself back up and keep going.

So, as you know, we’re impressed with Jodie Baehre – tell our readers more, for example what you’re most proud of as a company and what sets you apart from others.
I’m a painter. I create large acrylic urban landscapes of various cities. Most of my work is primarily of Boston, MA where I live and work and of Western New York, where I grew up. I have always been interested in architecture and art/artists who portrayed their surroundings, especially Edward Hopper. He was a real genius. Looking into a moment and knowing the exact time of day it is, by the color hues and cast shadows is such an intimate image to take in as a viewer. Sometimes, you feel like you are intruding but sometimes, sharing that moment. It all depends on color and light. In my own work, I have been working towards this idea for a long time and light plays a very important role in my work. I try and capture the vast diversity of the city, scattered light between buildings, its sounds and “beat” in my brush strokes and color choices. The complexity of the city provides constant inspiration allowing me to create portals to a familiar places.

I believe my clients are drawn to the very same idea that I am. They KNOW these places, they know what the light looks like at 5 pm on a Sunday in Downtown. They have walked down that street in Dorchester at night when one street lamp was the only solace of light. Even though my work is not hyper realistic, the colors I chose and my technique capture a single moment.

So, what’s next? Any big plans?
In the immediate future, I’m looking forward to hosting a mini art show in Dorchester with 5-7 pieces, three of which are new pieces of the area. This show is opening in mid-March and the reception is March 20th from 5-7 pm at Ashmont Grill, Dorchester.

I’m also producing an artist cookbook, a coffee table book really, of my own work and that of other local artists. Each recipe in the book corresponds with an artwork. Some of the recipes are real and some imagined. It is a passion project that will take some time but I am excited about it.

Additionally, I’m hoping to start doing some more night works and smaller pieces, try some new stuff with my paintings. I hope to have larger show of all new work in the fall. 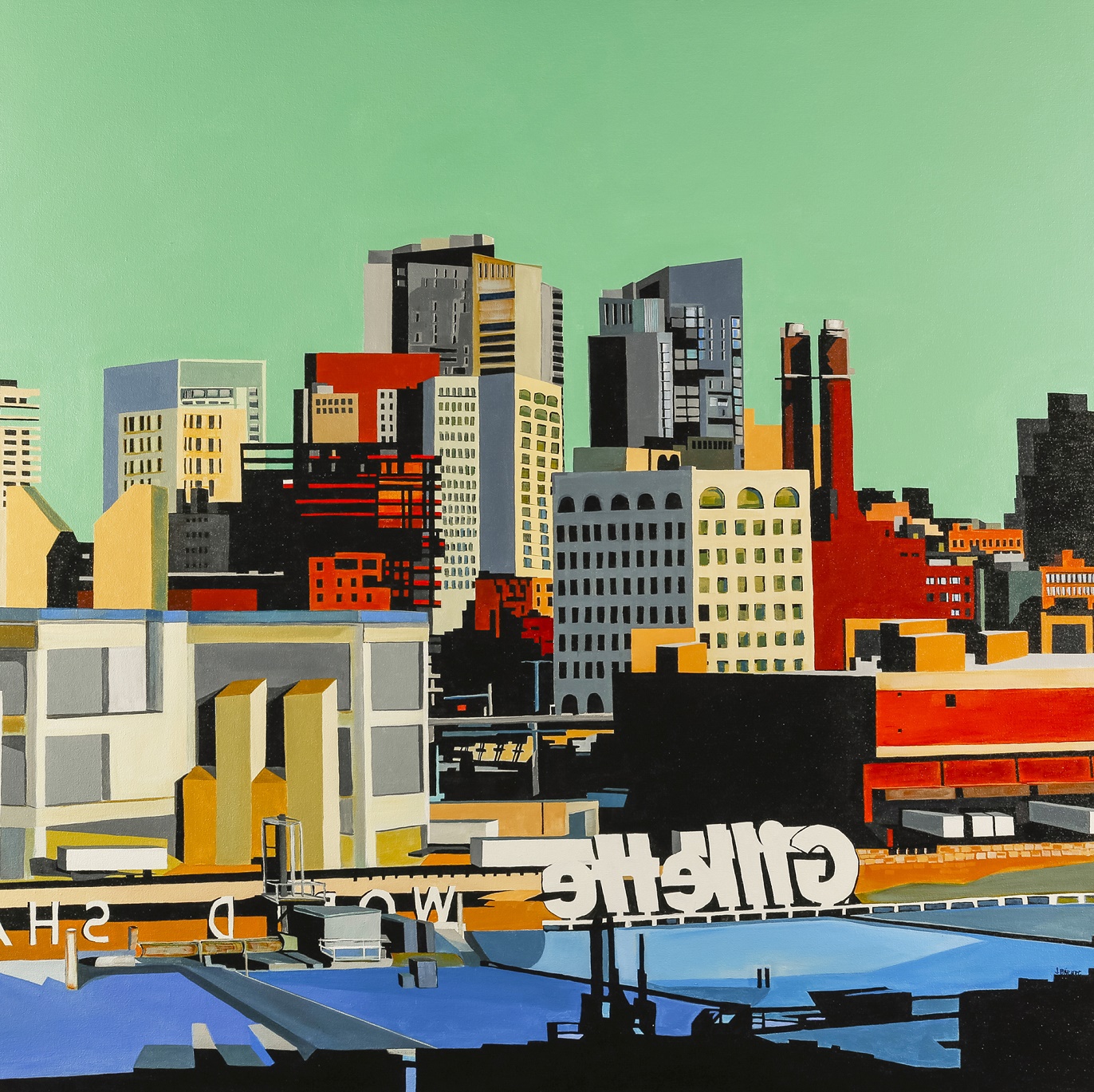 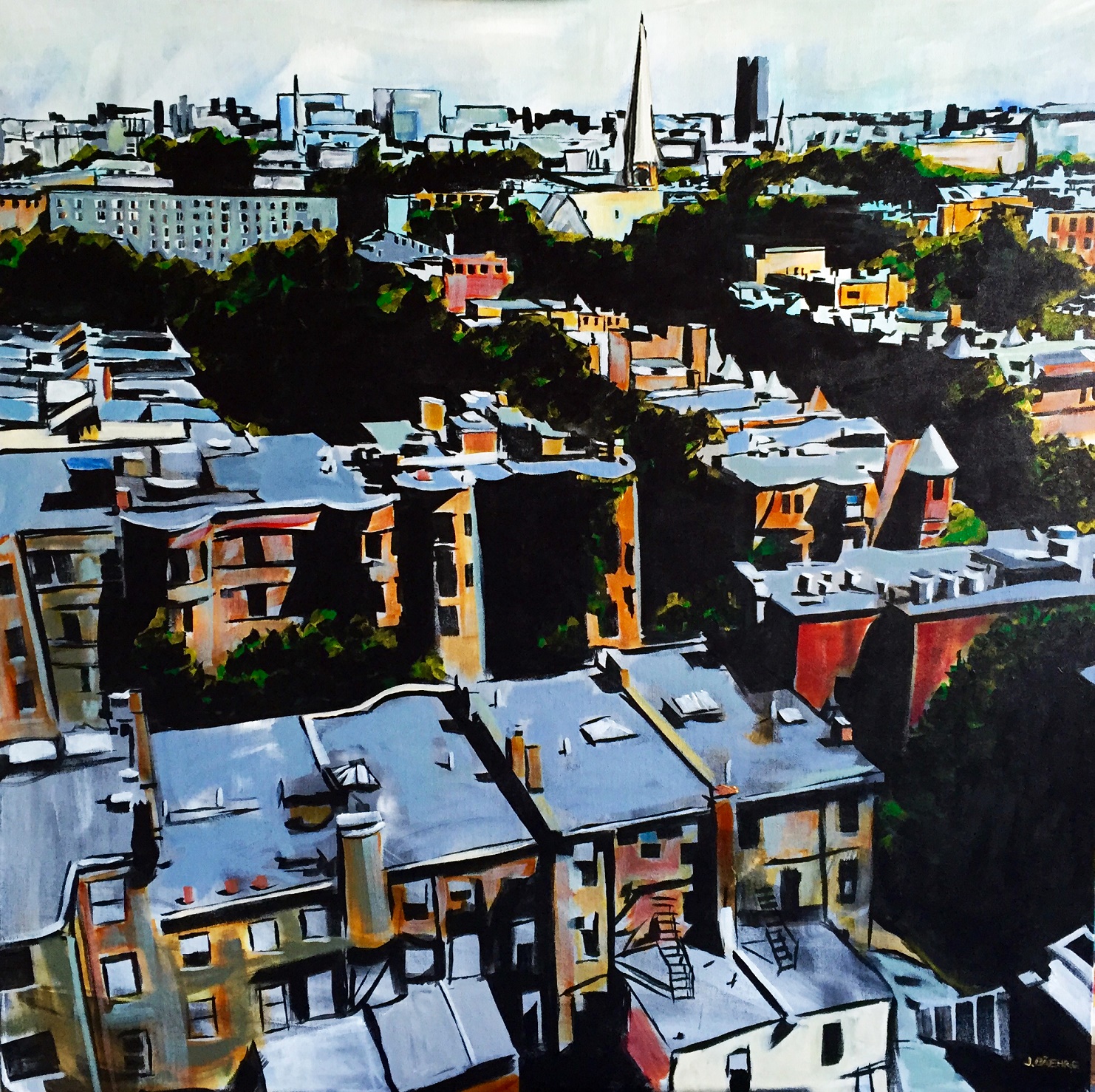 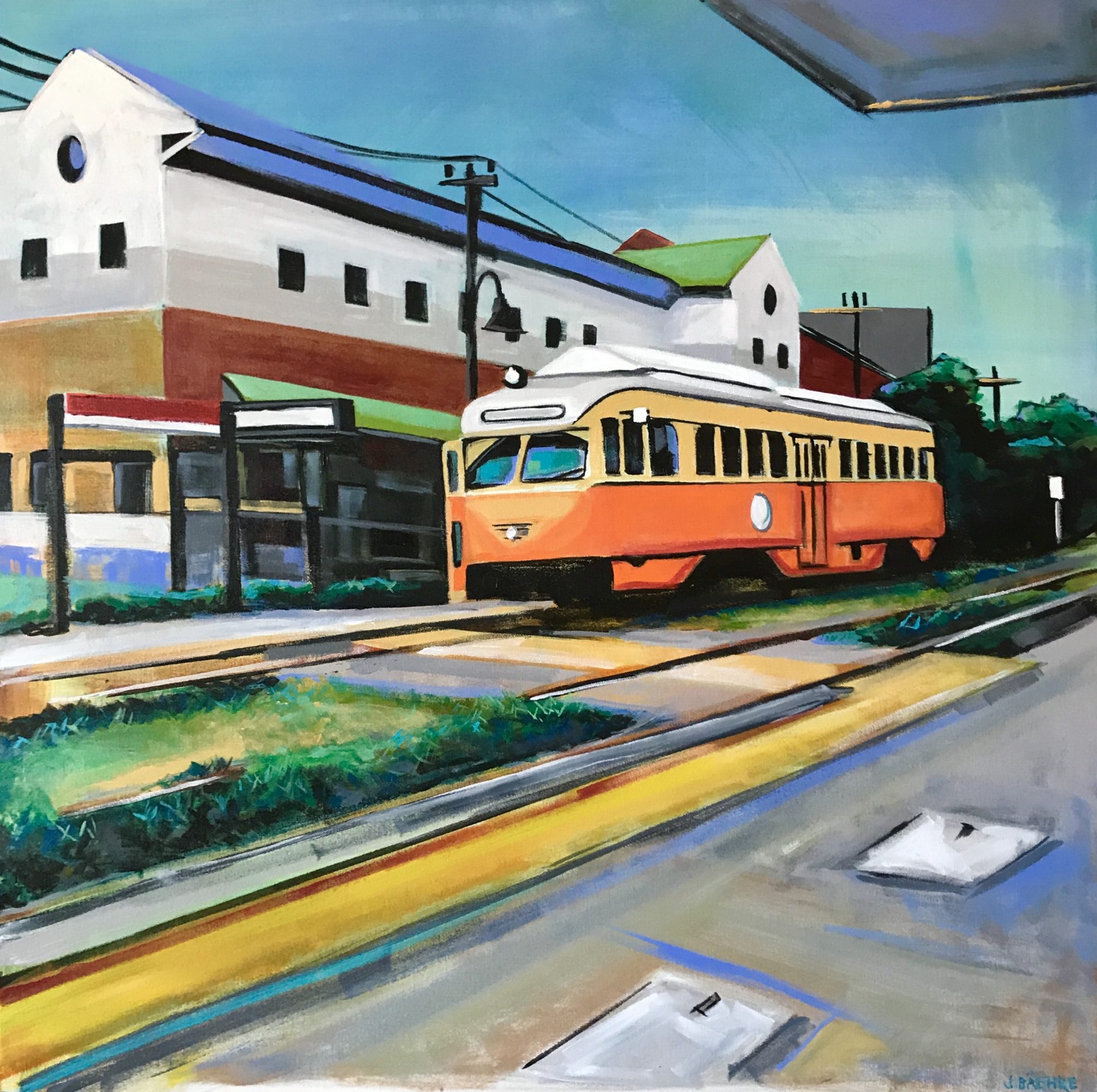 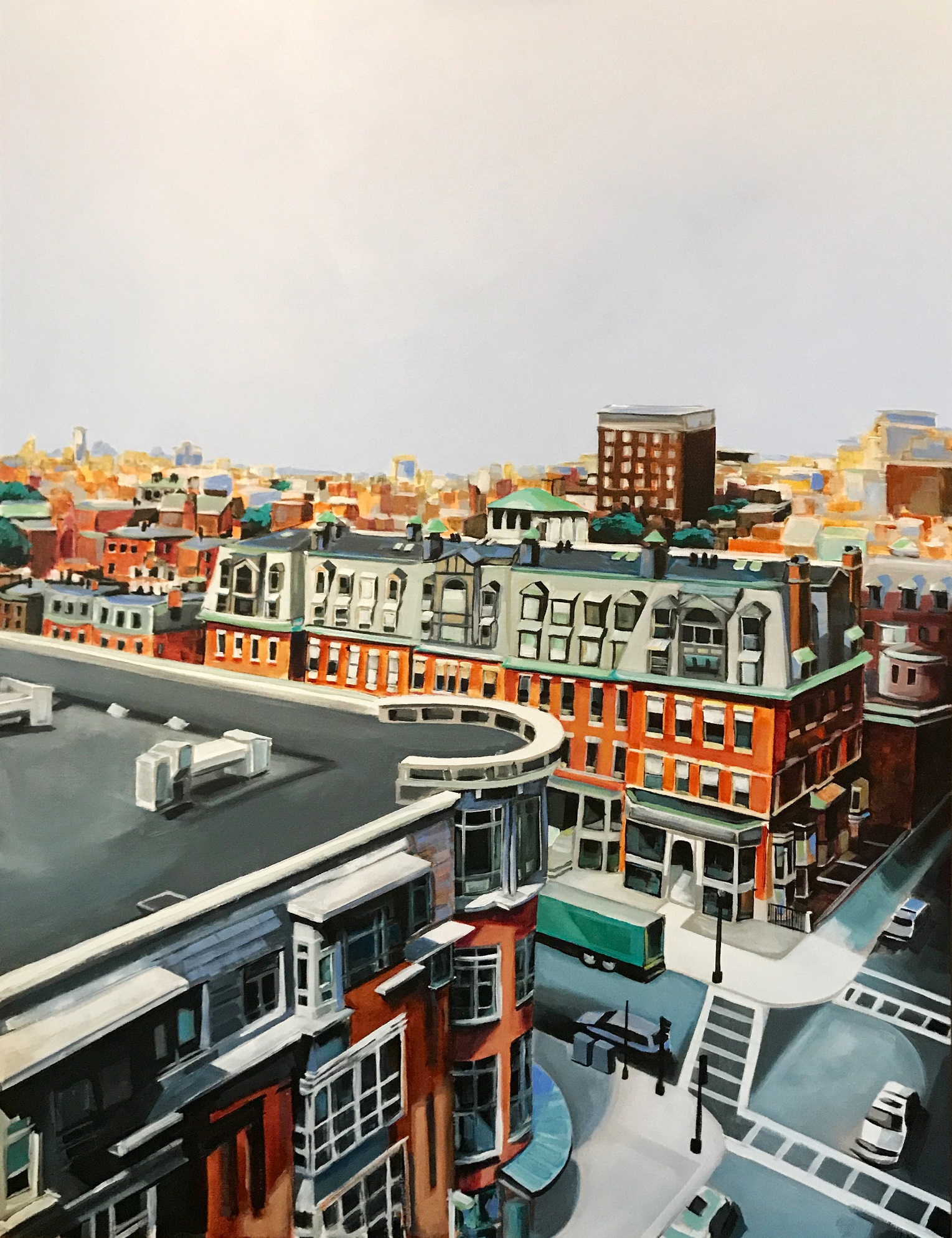 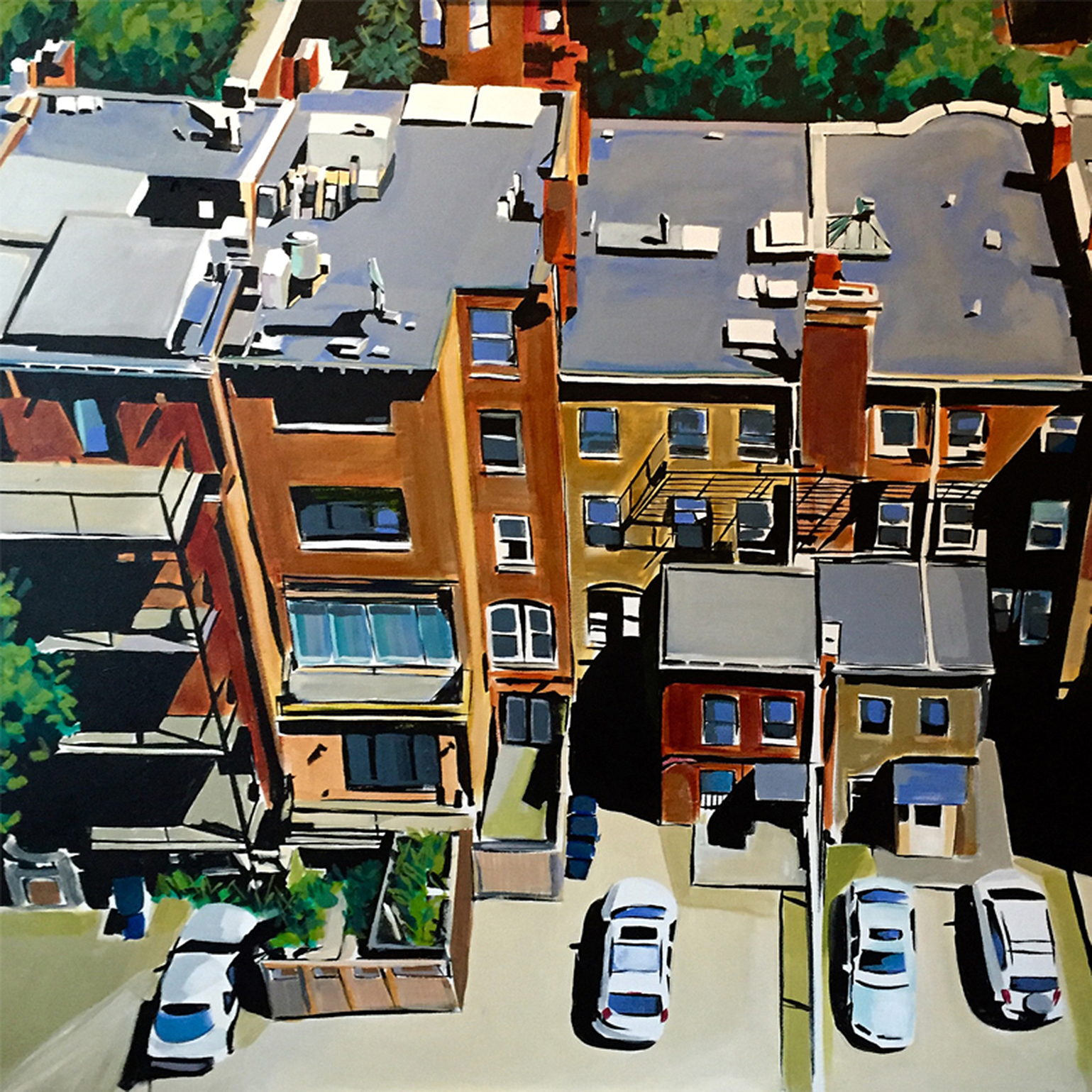 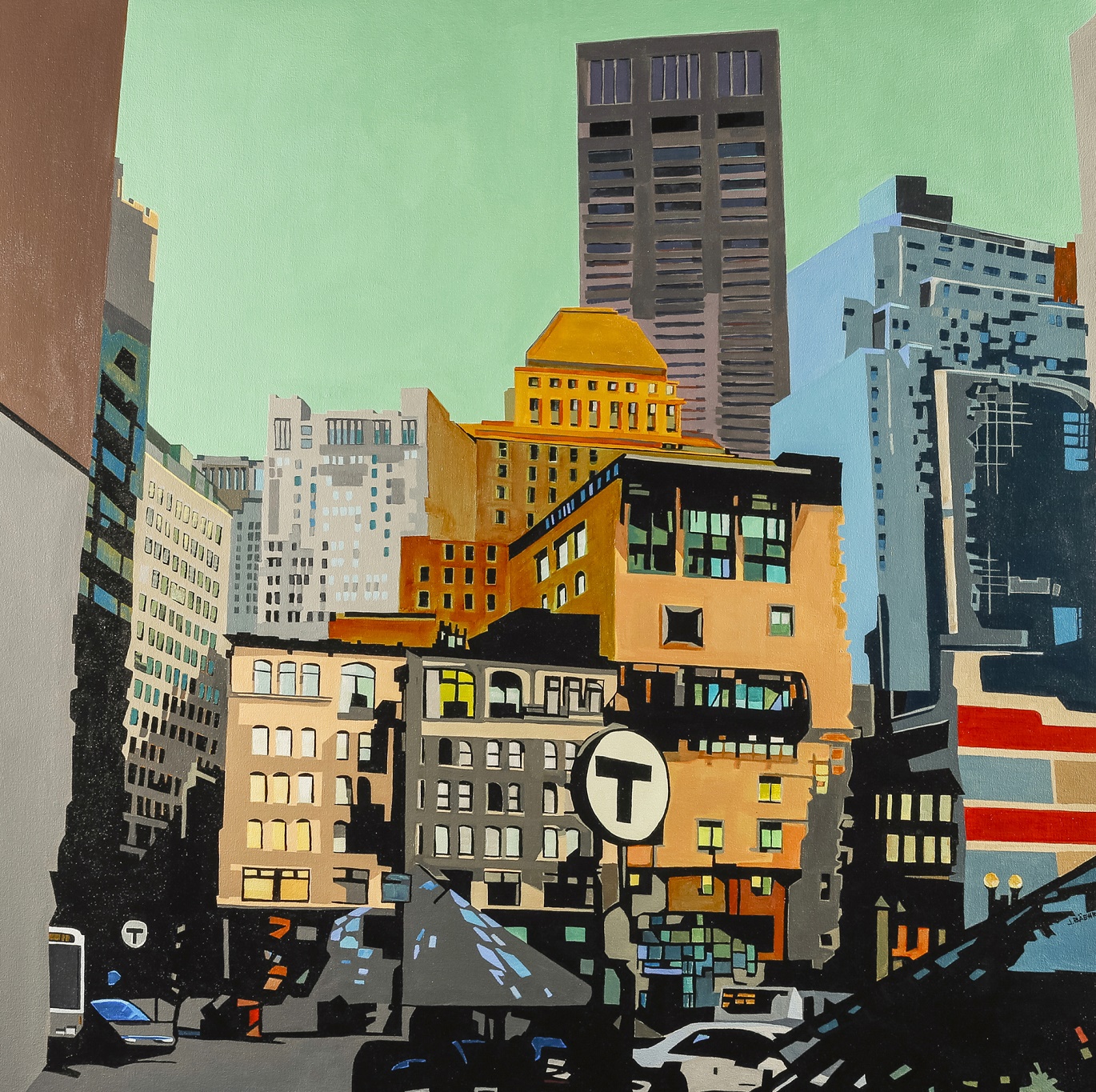