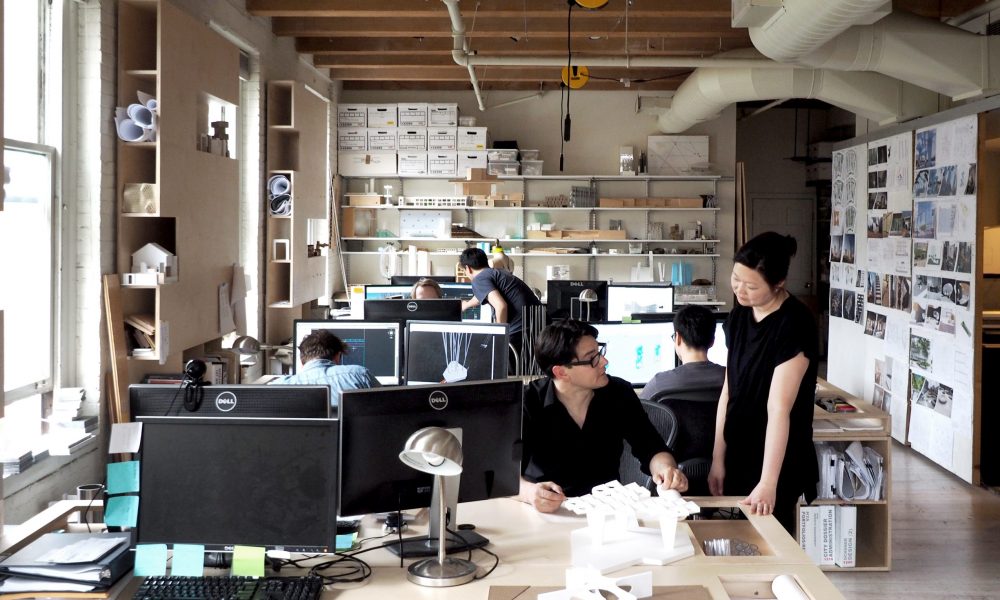 Today we’d like to introduce you to Eric Howeler.

We started working out of our studio apartment, and eventually the live-work became work-live. Meejin was teaching at MIT and Eric started teaching at the GSD. First projects were competitions, like the Athens 2004 Catch the Light competition which turned into our first project, White Noise White Light. We proposed a field of interactive fiber optic stalks that would flicker when activated. After we won the competition, we had to figure out how to make it and install it on time for the Olympics.

The first project set the tone for the studio, and we took on projects that blurred the line between architecture, public art, electronics and landscape. We argue that media is a material, to be used in conjunction with the more traditional palette of materials. We also collaborated promiscuously with computer programmers, fabricators, electronics engineers and sound composers. Early projects included interactive public art projects, but also exhibitions, graphic design, concept clothing, and buildings. We published Expanded Practice in 2009 to make that case that conventional definitions of architecture needed to be expanded to include hybrid and interdisciplinary projects.

Currently we our studio employs 18 full time staff, and we are working on a diverse array projects. We just completed the amphitheater at Downtown Crossing, the Swing Time project at the Lawn on D, the Collier Memorial at MIT, and an interactive public art project at Dudley Square. We are working on a few very modern custom houses. We are doing a 19 story residential tower in downtown Boston, a boutique hotel in Chendgu, China, and a submersible in Philadelphia’s Schuylkill River.

We’re always bombarded by how great it is to pursue your passion, etc – but we’ve spoken with enough people to know that it’s not always easy. Overall, would you say things have been easy for you?
There were moments when we thought, “If we don’t get a new project we’ll have to close the studio.” We’ve been growing steadily since 2001. In 2008 we had three employees.

We won the competition to design the Boston Society of Architects’ new headquarters at Atlantic Wharf. That kept us going through 2009. We applied for grants, won a Graham Foundation Grant to do a book on the Big Dig and the Greenway. We were invited to compete in the Audi Urban Futures Award, an international design research competition to explore the future of urban mobility. We won that competition and continued to do work for Audi, including most recently a 5 million square foot master plan for an expansion to their main factory campus in Ingolstadt. We expanded the office to include a fabrication shop and invested in CNC machines. The shop lets us keep testing, building prototypes and making unusual things. The swings at the Lawn on D is an example of a project that came out of the fabrication interest in the office.

We’ve often found that it’s better to fabricate something unique in house than to ask a contractor to do it. Many of the projects involve a lot of sweat equity. That’s allowed us to do exceptional design with everyday budgets and still produce work that is published.

There have certainly been moments where we’re not sure where the next project will come from. We often self initiate research projects when times are slow. I do feel that the book we did on the Big Dig was part of the reason we were able to compete for the Audi project, and the extra effort that we put into the design of a courtyard house allowed it to be published in Dwell, which has led to other projects.

We’d love to hear more about your business.
Our studio is diverse- sometimes we say schizophrenic. We’re interested in so many things: the history of highway infrastructure in Boston and its relationship to the public realm, how to make a roto-molding machine with two servo motors to cast a light weight plastic seat, if we were to submerge a walkway into the river can we create new relationships to the river ecology and can we make people aware of where their power comes from by producing and consuming it in the same place. These interests have led to book projects, swing projects, submersible public art projects and wind turbines. Our early projects in interactivity and integrating sensors and micro controllers was pioneering. The early work was explored at the scale of the circuit board. Now we are focused on a larger range of projects. The submersible project has an 80′ diameter. The MIT Collier Memorial consists of 32 unique blocks of stone that form a 5-way solid stone arch. We are looking at residential towers and how they meet the street as well as how the look on the skyline. The Audi master plan expands the factory to the south while maintaining east-west connections and showcasing future mobility prototypes.

What were you like growing up?
I grew up in Cali, Colombia. My dad was working for a non-profit international agriculture research institute. We lived in a rural area south of the city with lots of space.

Lots of room to explore and imagine. I moved to Bangkok in the 10th grade and experienced the Asian megacity as it was just beginning to boom. So my childhood was extremely rural and then extremely urban. I came to the states for college and found myself in upstate New York with long winters and architecture.

Meejin was born in Seoul Korea and came to the US when she was 3. She grew up outside of DC.