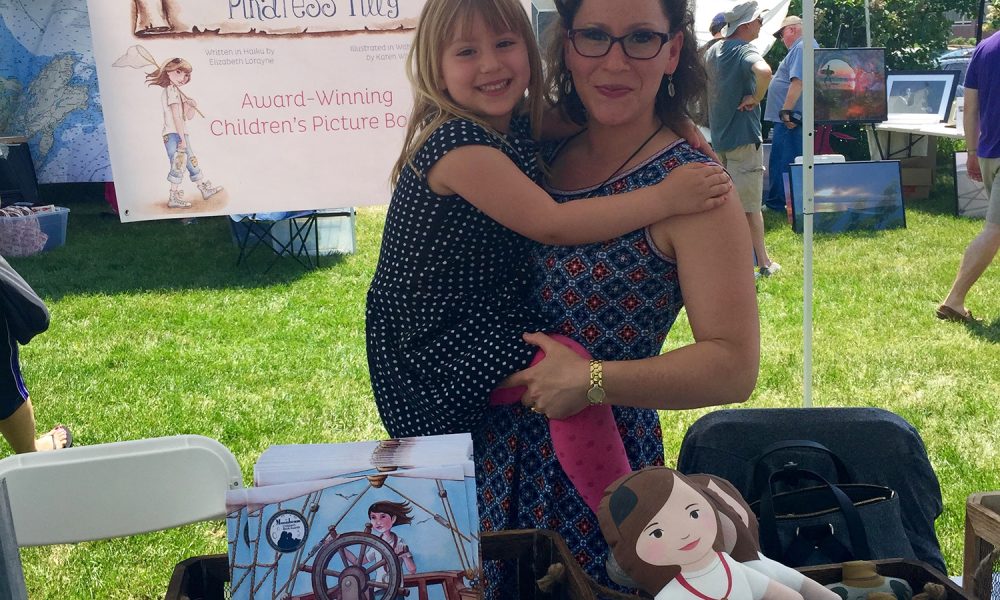 Today we’d like to introduce you to Elizabeth Lorayne.

Elizabeth, please share your story with us. How did you get to where you are today?
I was raised in Seattle, WA, where I spent a lot of my time bike riding, sailing, and cultivating my interests in science, art, and writing. In heading off on my own adventures that took me from North Carolina, to Pennsylvania, to NYC and finally to Newburyport, MA; I have continued to value my childhood experiences surrounded by nature, art, and a strong academic curriculum in the sciences and humanities.

It took having my own daughter in 2012 for me to finally find a way to merge my passions for science, art, writing, and empowerment. When my daughter and I would browse the library walls and shelves together, I personally felt left out of the colorful stories on display. Where were the strong heroines? Where were girls interested in science? Or the girls with an adventuresome spirit?

Quite suddenly I found myself, cuddled with my 14-month-old daughter, eagerly writing the story of a budding naturalist, who captains her own ship, leading her “crewmate brothers” of orphaned boys from around the world, along with her rescued best friend, a koala named Yuki, on an exploration trip to the Galapagos Islands. I wrote the story entirely in the poetic form of haiku. I had found and continue to find this format to be a deeply rewarding challenge – to get your story across as succinctly and as vividly as possible in a very limited way.

This experience of creating The Adventures of Pirates Tilly, has lead me to not just continue her adventure as a series, with the next book leading her to Easter Island, but to broaden my overall passion and goal of reaching children, primarily girls, who aspire to be more – to be a scientist, or a mathematician, or an engineer, or an astronomer. As Pirates Tilly is a budding naturalist, she is found in her stateroom studying Charles Darwin, Beatrix Potter, and Katherine Routledge – all scientific figures throughout history. It is this bridge between my fictional character to non-fiction historical figures that later inspired The Historical Heroines Coloring Book: Pioneering Women in Science from the 18th and 19th Centuries.

As I was finishing the sequel, The Adventures of Pirates Tilly: Easter Island over the summer of 2016, I had an idea – what if there were a coloring book that celebrated historical women in the sciences! Women beyond Maria Curie (although she is in it, she is alongside her Nobel Prize winning daughter, Irène Joliot-Curie!). And so, I set out to test the waters through crowd-funding. Little did I expect Kickstarter to choose the campaign as a “Project We Love,” or expect 200 strangers to back the project!

Overall, has it been relatively smooth? If not, what were some of the struggles along the way?
The creative process itself for my books has been a smooth road. Each story and idea has felt important enough to me to bring it into the world. However, self-publishing is not a smooth road. There tends to be a great deal of bias towards self-publishers. I have worked particularly hard to produce library quality books because I want to show doubters that there are independent publishers out there with an understanding for good books. Encouraged by my local public library to get an industry review, I submitted my first book, The Adventures of Pirates Tilly, to Kirkus for a review in 2015. I must have let out the longest sigh of relief, followed by tears of happiness, upon receiving a glowing review. Kirkus had understood my goal! And to boot, they had chosen not only that review but the sequel’s even better review for The Adventures of Pirates Tilly: Easter Island to be featured in their indies section of them by-monthly magazine! From there I have submitted and won many a book awards.

The other biggest problem I face as an indie is distribution. To combat it, I attend festivals to sell my books and I am always left feeling deeply supported by the attendees and consumers. Hearing people excitedly understand my girl-empowerment and science-focused books is wonderfully encouraging.

Alright – so let’s talk business. Tell us about White Wave Press – what should we know?
It was an aha moment I’ll never forget – as an artist myself and as someone who had dreamed of being a writer since my own childhood, it was while pushing my then infant daughter in her stroller mulling over publishing options that the loudest most soulful option became clear – form my own indie publishing company! And thus, White Wave Press was born. I am proud of the themes I keep feeling called to write on and create books about – those that inspire a sense of empowerment and a sense of curiosity for our world whether that be through science or exploration of the natural world itself.

Any shoutouts? Who else deserves credit in this story – who has played a meaningful role?
First and foremost I must give enormous credit to the artists I’ve worked with. For the Pirates Tilly series, Karen Watson of Vancouver, British Columbia has brought the stories to life in such detail and beauty through her watercolor illustrations. I am incredibly honored to have worked with her twice. I am also so proud that for two different exhibitions, her original watercolor paintings from both books have been shown (and sold!) at an art gallery on Bowen Island, B.C.!

Throughout all three books I employed an editor who is also a science historian. Michael D. Barton has not only been supportive of my ideas but has helped with the research needed for The Historical Heroines Coloring Book and has helped provide a biography on Charles Darwin in the Pirates Tilly books.

My husband, Robert, is an artist himself – a musician – and has been my number one supporter and fan, well, maybe next to our 5-year-old daughter, Vivi. 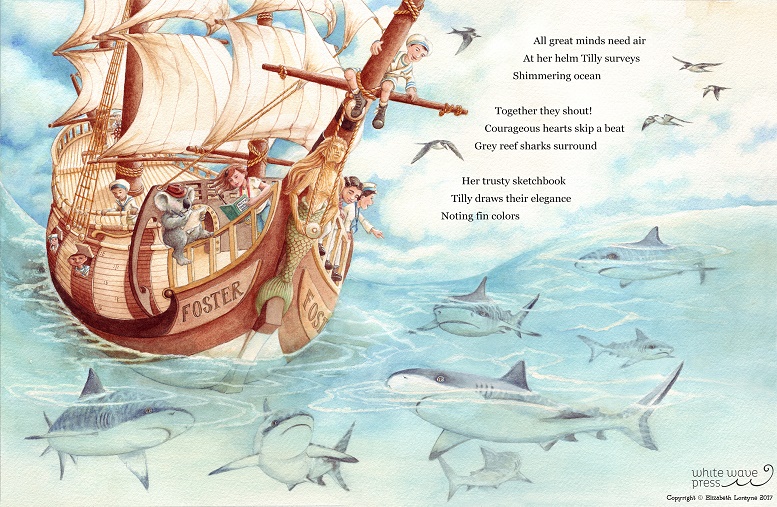 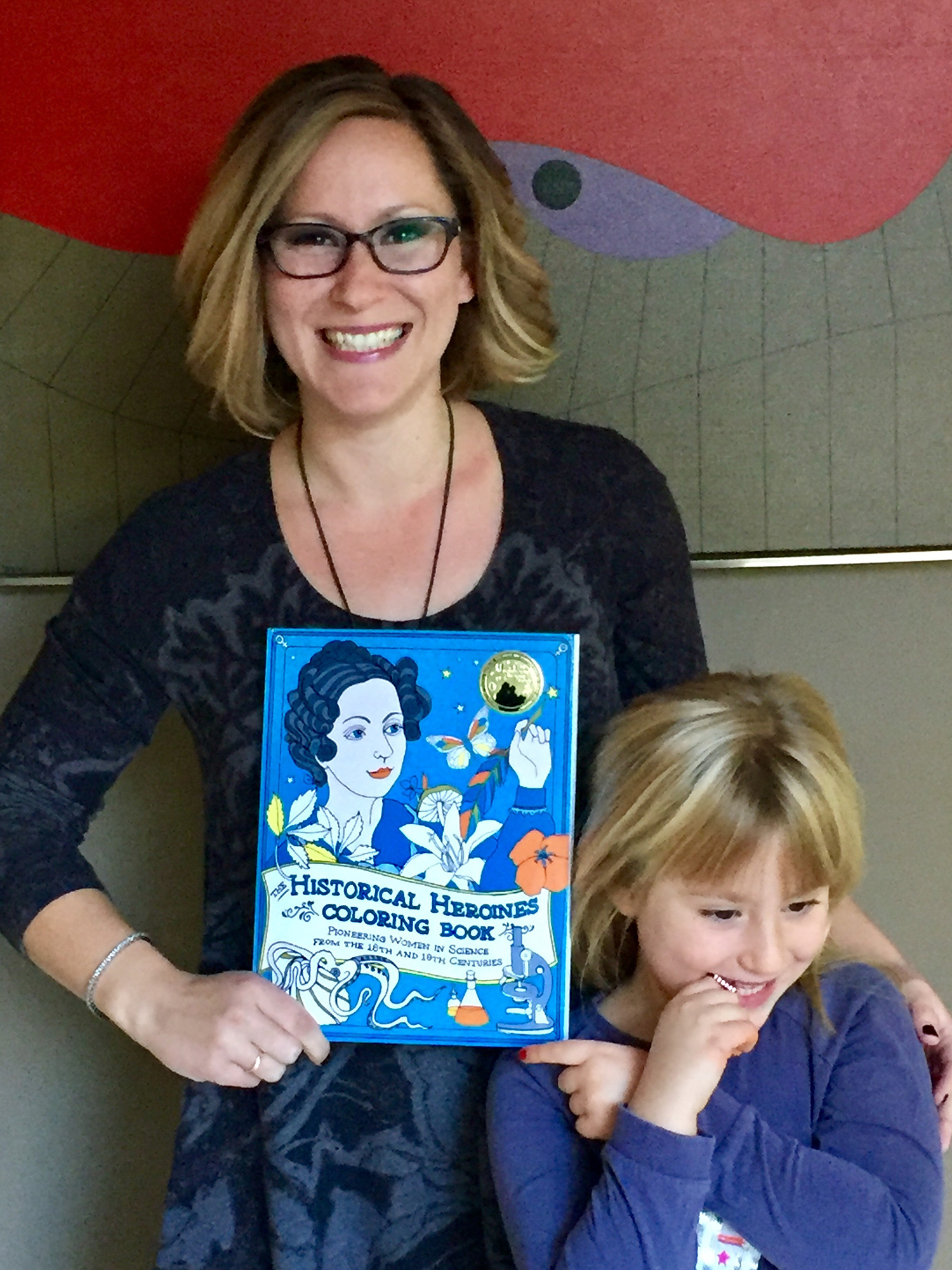 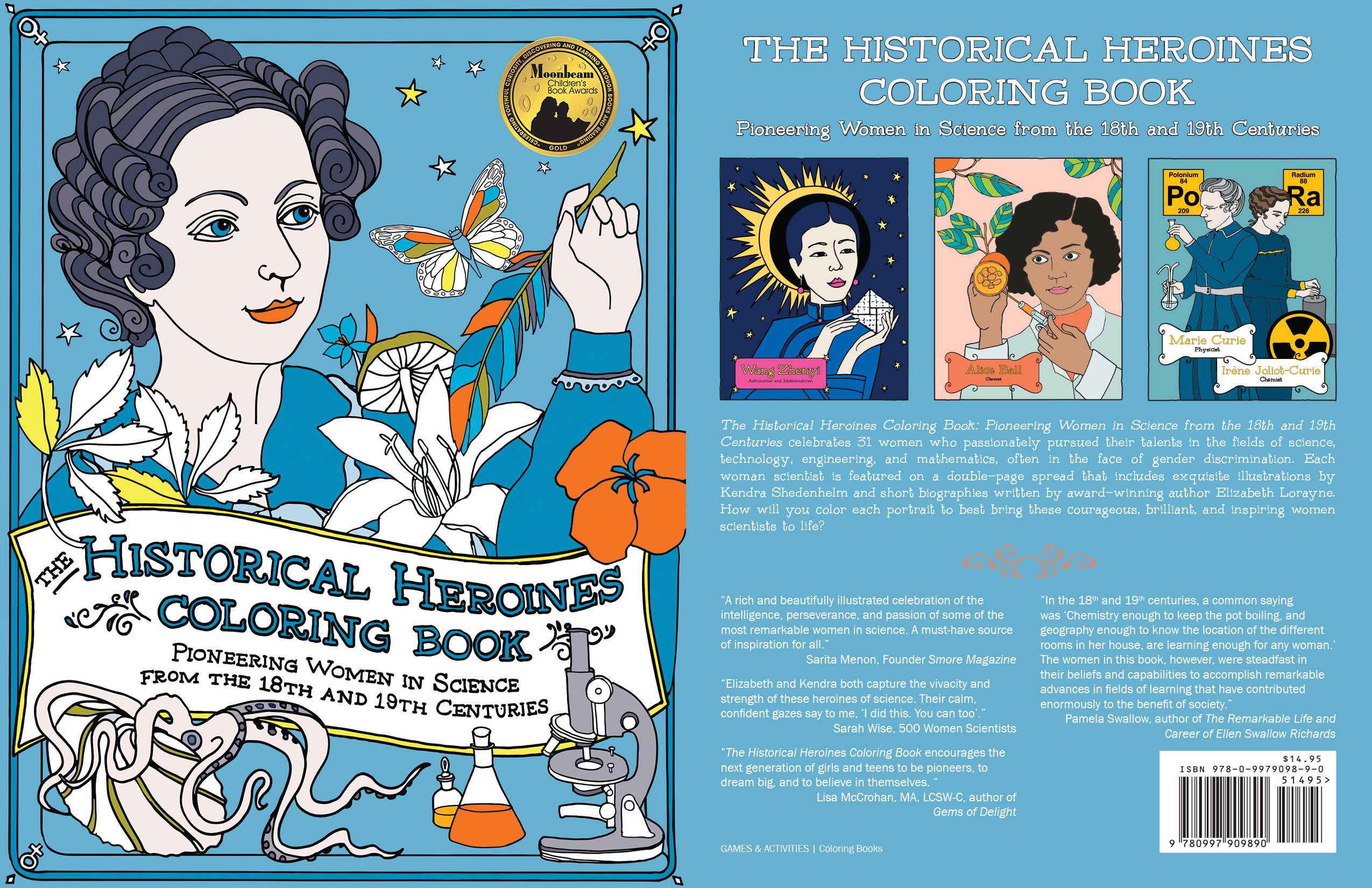 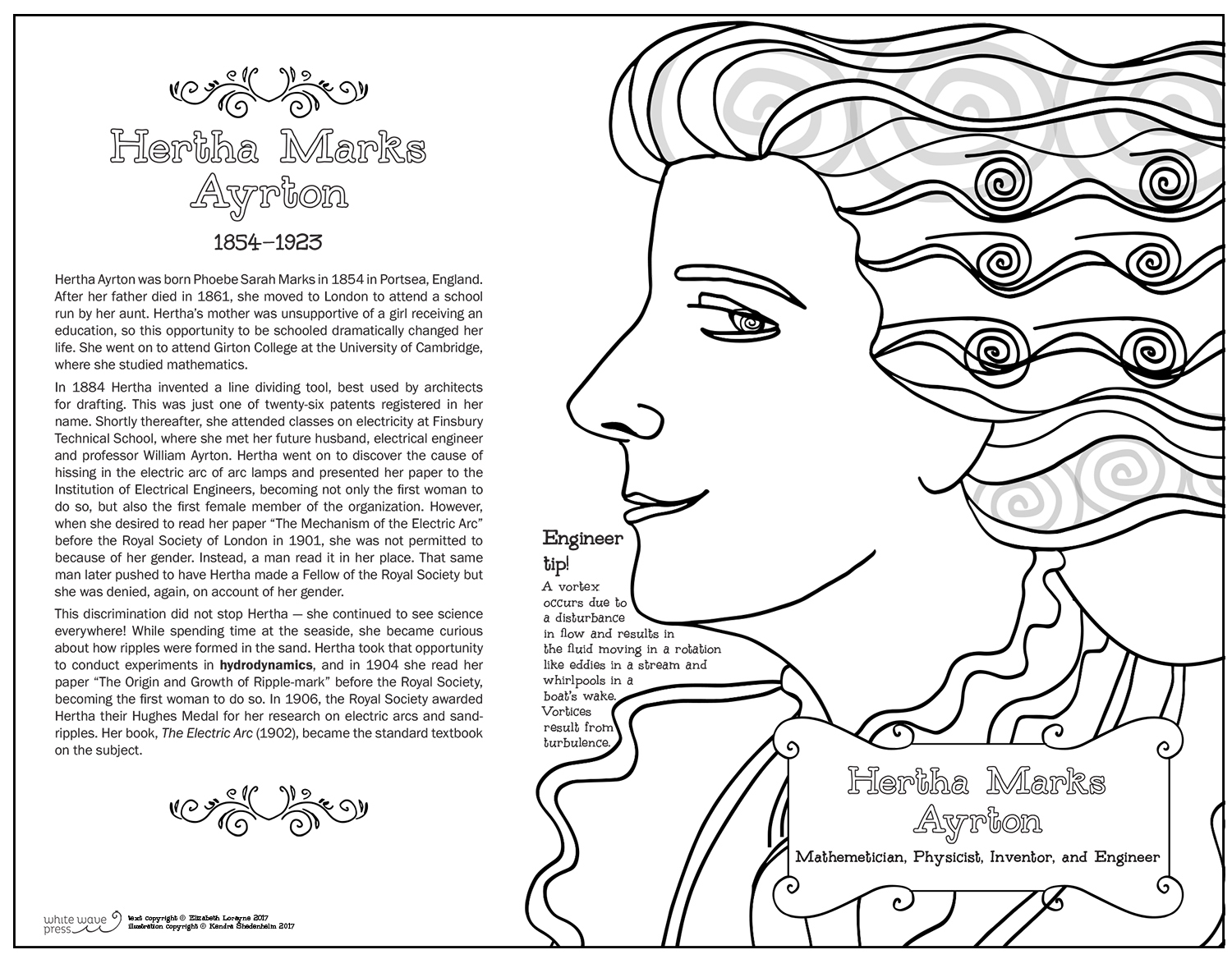 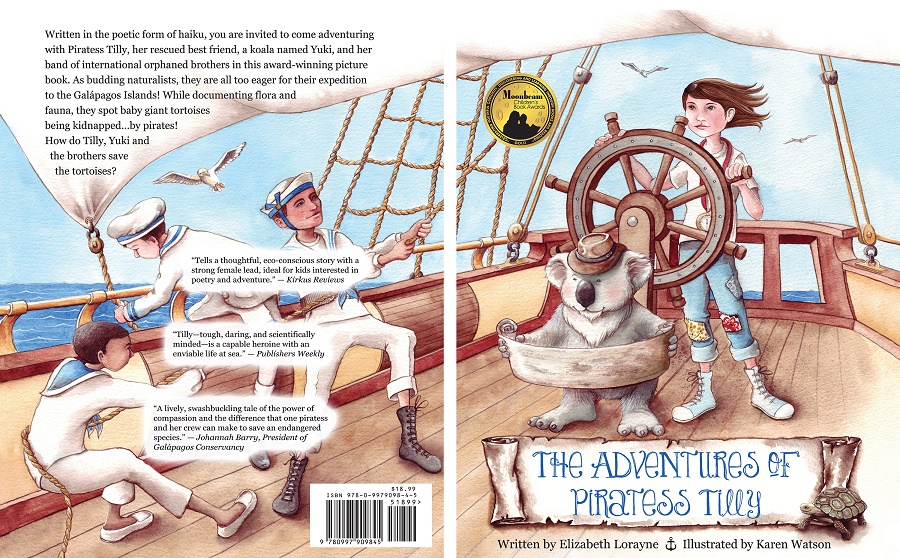 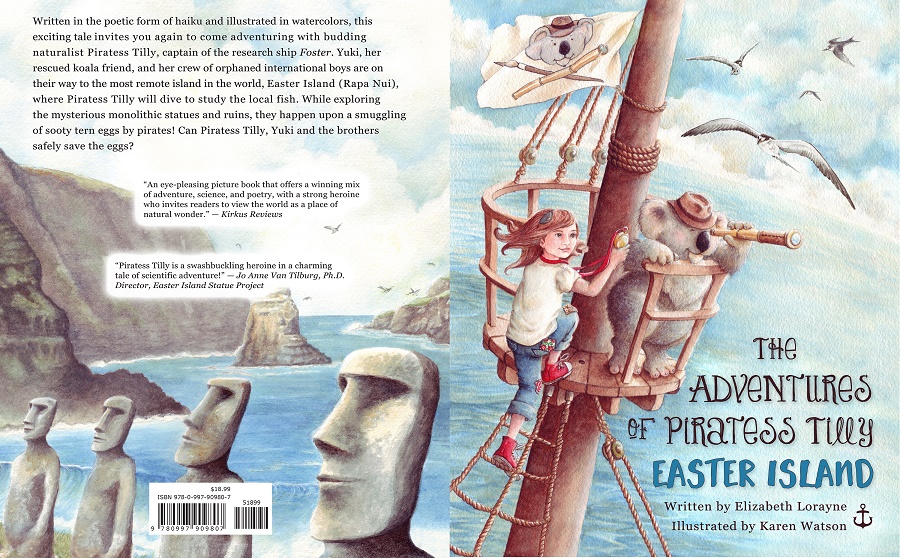