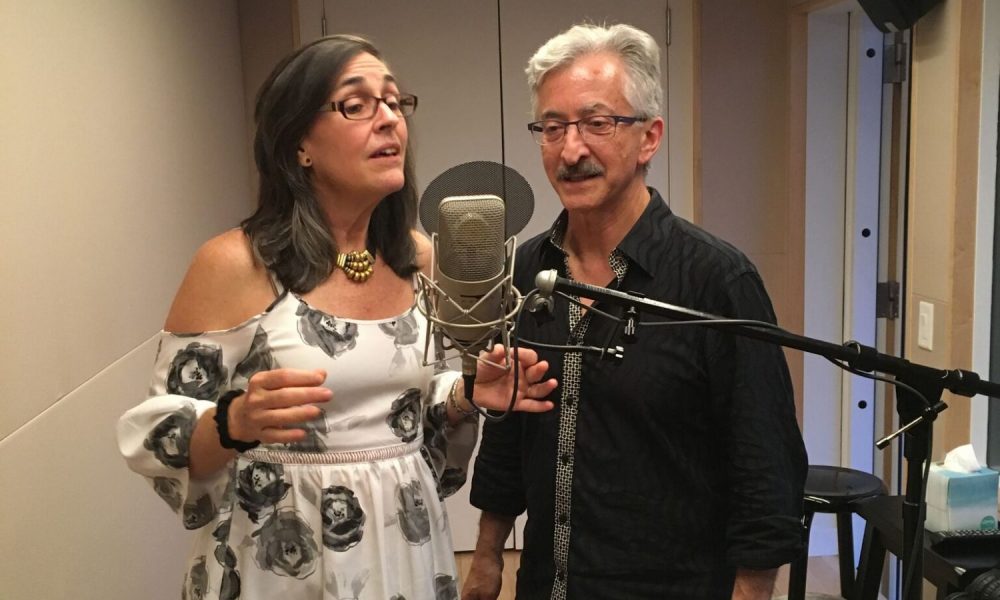 Today we’d like to introduce you to Rosi Amador.

Rosi, let’s start with your story. We’d love to hear how you got started and how the journey has been so far.
We began our music career together in 1984 as co-founders of the popular Latin Band Flor de Caña, a group that met during a cultural exchange tour to Central America and returned with a commitment to singing for social change. When that group dissolved in 1994, we formed our own band, Sol y Canto, which we describe as “Latin roots music to change the world; passionate, poetic, playful and honest.” Over the years, we were honored to win several awards including three Boston Music Award for “Outstanding Latin Act,” have toured internationally and have established a reputation for quirky original compositions that address matters of the heart, social and global aspiration, combined with our unique and driving interpretations of contemporary Latin music. When our twin daughters were four years old, we brought them into the family business. They recorded on our CD of music for kids and their families, and performed with us when school permitted. Our daughter Alisa Amador is now a singer-songwriter in her own right. Learn more about Sol y Canto: www.solycanto.com www.facebook.com/solycanto Facebook: Sol y Canto Instagram: Sol y Canto Twitter: Sol y Canto

In the 1980’s, while touring and recording, we began to be called upon for educational voiceover recordings for kids. Recording at studios in the Boston area into the 90’s, we learned on the job, and we loved it! Developing this passion for recording voiceovers led to the official establishment of our company, Amador Bilingual VoiceOvers 2010. Eventually voiceovers replaced music as our full-time career, in an organic way. ABVO is a family business. Rosi, Brian and our 21-year old daughter Alisa record bilingual voiceover regularly for a global list of clients. We use our voices to build cross-cultural bridges, and to bring compelling messages to life. We serve both North American and Hispanic/Latin American markets, recording from our private studio in Cambridge. Our success is built upon our ability to provide evocative voice acting in flawless native English and neutral Latin American Spanish or English with a Hispanic accent. We are bilingual and bicultural, and we navigate both worlds seamlessly. We are now one of the foremost providers of bilingual English and Spanish voiceovers in the United States.

We’re always bombarded by how great it is to pursue your passion, etc – but we’ve spoken with enough people to know that it’s not always easy. Overall, would you say things have been easy for you?
As for any entrepreneurs, it took time to establish ourselves both as musicians and as voiceover actors, locally, regionally, nationally and then internationally. The journeys have been similar for both careers in that succeeding as a business that fills any need has everything to do with understanding what the needs are in the market and meeting that need with the utmost care and dedication, so that your clients feel they’ve found a great resource they can rely on again and again.

As musicians, there were continuous struggles as levels of funding for our cultural presenters ebbed and flowed. The ups and downs during the 80’s and 90’s were frequent, yet we persevered by continually believing in our music and its message and by marketing ourselves, communicating with our fan base, which at one time numbered 11,000, by snail mail (!). Fortunately we can do this online now. We still do around 30 concerts a year, primarily in the Boston area with occasional tours to places we love such as California, New Mexico, and parts of New England. Making a living as a musician was and still is a sacrifice unless you do commercial music, and you really have to love it since musicians aren’t compensated as well as they should be.

As bilingual voiceover actors we worked hard to establish ourselves locally and be seen as a resource for local production companies, very quickly getting connected with regional and national companies, recording studios and then agents, by training with voiceover coaches and acting coaches and by researching which important industry events to attend that could best help us improve our skills and grow our network. All of this took time and due diligence. The challenge at first was to figure out where the resources were to help us become as professional and skilled as possible. Finding local mentors was a critical step that led to launching our business officially once we felt confident about presenting ourselves in the marketplace.

So, as you know, we’re impressed with Amador Bilingual Voiceovers, Sol y Canto – tell our readers more, for example what you’re most proud of as a company and what sets you apart from others.
Amador Bilingual Voiceovers’ global clients frequently remark on our excellent customer service and our ability to provide male, female or adolescent female voiceovers in flawless native English, Spanish, or Hispanic-accented English. We’re seasoned talents. Together we voice for a wide variety of applications, specializing in commercials, museum audio tours, corporate videos, overdubbing from English to Spanish, on-hold and IVR telephone messages, industrial training videos, eLearning modules, children’s bilingual audiobooks, documentaries, audio tours, and explainer videos. We specialize in the areas of health/medical, children’s educational, and social change-related issues. We truly value being part of our clients’ team. We care as much as they do about the final product and delight in leaving our vocal imprint on each and every project and in developing personal relationships with them. We also pride ourselves on providing top quality translations and original music for our clients’ projects. Learn more about us: www.amadorbilingualvoiceovers.com

Sol y Canto is led by my wife, Puerto Rican/Argentine singer and bongo player Rosi Amador, and me. I’m originally from New Mexico. I’m a guitarist, composer and Sol y Canto’s musical director. Featuring Rosi’s crystalline voice, and my Spanish guitar, we occasionally expand to a trio, quartet, quintet or sextet, including virtuoso musicians from all over Latin America and the U.S. on piano, winds, bass, and percussion. We have recorded seven commercial CD’s featuring Latin music for adults and bilingual music for children. We’re particularly proud of the fact that our music is often used as a bridge to help bring North and Latin Americans together. We often perform for mostly non-Spanish speaking audiences, for whom our music is a way of learning more about Latin America. The Boston Globe called us “Boston’s pan-Latin ambassadors”. We are particularly dedicated to raising awareness of social issues through our music, which we use as an expression of our values and hope for a better world. Learn more about us at: www.solycanto.com

So, what’s next? Any big plans?
Sol y Canto has a very exciting new project that’s about to be revealed. This fall we will release “Sabor y Memoria: A Musical Feast in Seven Courses,” a CD and DVD of original Latin music all about food! It’s a suite in seven movements for the Sol y Canto sextet and a string quartet, accompanied by stunning food-themed photos, recipes and a mini-documentary about the creation of what we feel is our best work yet! From the appetizer to dessert, it’s a Latino musico-culinary, multi-sensory mix of music, images and flavors in Latin rhythms from Cuba, Venezuela, Mexico, Argentina, Peru, Panama and Puerto Rico, where each movement is a “dish” in an imaginary meal. Recorded live with the Boston Public Quartet in a performance presented by the Celebrity Series of Boston, this DVD is guaranteed to make you hungry! The DVD was crowdfunded by our fans, and all sales revenue will go to a wonderful non-profit in Boston called the Haley House, which “uses food and the power of community to break down barriers between people, transfer new skills, and revitalize neighborhoods. We believe in radical solutions: solving problems at their root by challenging attitudes that perpetuate suffering and by building alternative models.” Learn more about it here: http://solycanto.com/saborymemoria/

Rosi Amador was cast in a major role in Boston of the Broadway hit musical IN THE HEIGHTS by Lin Manuel Miranda (HAMILTON). She will play the role of Camila, the strong Puerto Rican mom that keeps the family together in this fantastic musical about the Latino neighborhood of Washington Heights in NYC, which will make you cry, laugh and want to dance in your seats! The storyline, choreography and music are simply extraordinary. The play runs from October 27- November 19th at the Wheelock Family Theater. For tickets and group sales contact: wheelockfamilytheatre.org/current-season/feature-performance/  Feel free to use Rosi’s discount code for tickets: HEIGHTS17