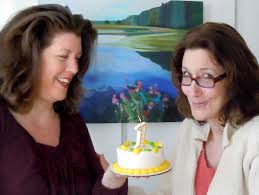 Today we’d like to introduce you to Kris Waldman and Kelly Grill.

So, before we jump into specific questions about the business, why don’t you give us some details about you and your story.
Kris Waldman’s story:
For most of my adult life I worked as a Graphic Designer and Art Director. I had been making art since I was a kid, and initially thought it was a miracle that I could make a career using my art skills. But I was getting burnt out. Creating work for someone else is very different from making art that comes from your heart. In 2003, I took a break from my long time job at an interdisciplinary design firm to go on a retreat in Belize led by artist Genie Kell. In addition to teaching us advanced painting techniques, Genie heavily encouraged experimentation – leaping into unknown territory – to help us break out of our preconceived notions of what art-making is. I suddenly felt like I was on fire – interacting and communicating with the world in ways I no longer did in my day-to-day life. The following year I applied to the Art Institute of Boston at Lesley University to get a Masters in Fine Art with the goals of expanding my art-making and critiquing skills, and to accrue the credentials to teach art. I hoped to make an impact in someone’s life as Genie had for mine.

While in school, I joined the board of the Cultural Arts Alliance (CAA) because I wanted to take part in shaping the growth of the non-profit art center in my hometown, and further the organization’s dream of renovating a dilapidated barn on the property to house gallery and performance space. I became the Executive Director of the CAA in 2010. That year, I also met Kelly Grill. The rest is history!

Kelly “Westcott” Grill’s story:
Along with a small group of talented friends, I helped found Enter Stage Left Theater while still in High School in 1980. The group evolved from a dream of creating more opportunities to perform in and around Hopkinton. During study halls we would ask for a pass to the band room so we could work on our latest ideas. We wrote shows to raise funds for the library, a scholarship fund and simply to perform the next show. All the while we dreamt of finding a home. Little did we know that some 30 years later we would see the dream realized just a few hundred feet from the band room doors. We believed then and now that theater connects people in such a unique special way. It allows us to bring shared experiences to life in a way that is celebrated taught and experienced equally by everyone in the room. No other art form has the power to touch people that way. I think it is the reason our small group of actors has remained close friends for over 30 years.

After studying theatre in college I performed for a short time and then moved to California to start a family and my 20 year career as a recruiter. In 2004, after moving back home I opened a small theater on Main Street in Hopkinton and reestablished Enter Stage Left Theater (ESL) as Hopkinton’s community theater.

It was still the dream, with the same group of friends in the same small town. Our space was a storefront that previously housed a barber shop for 35 years. Interest in theater and the arts was overwhelming in our town. We quickly grew out of the space. In 2010 we spoke with CAA about teaming up to help convert a 19th century dairy barn into classrooms, a gallery and a 200 seat performance space. That was the fortunate year when I met Kris Waldman.

Kris and Kelly’s story:
2010 was a big year! Not only were we thrilled to dream together about bringing the visual and performing arts under one roof, but the HCA was awarded a large pledge of funds towards a capital building campaign from the Hopkinton Community Endowment (HCE). Together, the HCA and the HCE partnered to create a capital building campaign that would bring our dream to fruition. We were also awarded funds through the Community Preservation Commission in Hopkinton and a large grant from the Massachusetts Cultural Council. Additional private funds helped us reach our goal of 2 million dollars. In 2015, the HCA opened the expanded arts center, consisting of the renovated, now two-story barn, plus a new art gallery and a 200-seat performance space.

We’re always bombarded by how great it is to pursue your passion, etc – but we’ve spoken with enough people to know that it’s not always easy. Overall, would you say things have been easy for you?
Fundraising to build out the new building simultaneously with raising Operations Funds continues to be hugely challenging. We have this gorgeous new center – so many people assume that we are all set – but we aren’t! We need to purchase sound and light systems for the Delbridge Family Performance Space, and the expense of maintaining 10,000 square feet of additional space is costly. In addition, the expanded spaces have enabled us to triple our program offerings and offer four times as many events and performances. This requires many additional resources and staff.

We’d love to hear more about your business.
The HCA offers classes in dance, music, fine arts, theater, photography, and ceramics and is home to theatrical, dance, and music performances. We are very proud of the variety of our programs and we make them available to everyone. We want to encourage every single person in our community to discover or continue to nurture their creativity.

We’ve heard people who come here call it “home”, “my church”, “an exuberant place”…. A student with Down syndrome said, “Playing a part in Cinderella was the best thing I’ve ever done in my life.” A woman who had always been afraid to make art said, “That painting class gave me so much confidence and clarity that I’ve transformed my business and my marriage!” A young man who came to us as a shy fifth grader credits the theater programs with making him the man he is today, a successful student at Harvard University.

We think visitors sense that all of the staff and teachers who work at HCA give 200%. Every one of us is driven by our passion to make art accessible to the entire Metro West community, and fostering the creative spirit in every individual.

What were you like growing up?
Kris: I was very shy and awkward. Fortunately, my Mom signed me up for oil painting lessons when I was 7, so I developed an interest in looking at things very carefully to draw them or figure out what to make them into. I spent most of my time foraging in the woods and stream near our house, looking for twigs and pine needles to make baskets that were too delicate to hold anything, or for crayfish and salamanders to place in the homes I created for them out of cereal boxes.

Kelly: I was extremely shy. So much so that I was afraid to raise my hand in class or talk in a small group, however getting up on a stage in front of hundreds of people to sing came naturally to me. It was my happy place, my home. I was in junior high when the drama teacher came up to me after my performance in a musical and said “I really enjoyed your performance. I see something in you. I would like you to audition for my play in the fall.” It was a pivotal moment. Someone believed in me and it changed how I viewed myself. I see that here every day. Those shy kids who “find their voice” through art, music, dance or theater. It is a magical thing.