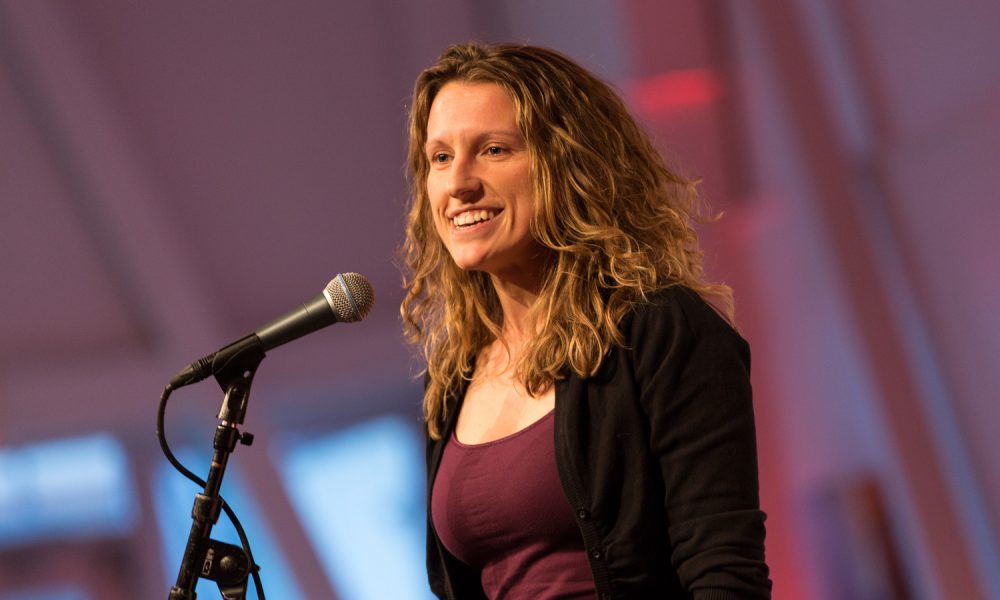 Today we’d like to introduce you to Katie Liesener.

Thanks for sharing your story with us Katie. So, let’s start at the beginning and we can move on from there.
One day in 2010, I happened to see a flyer at a coffee shop for a Massmouth story slam. I taught college-level writing classes at the time but had never “performed” a personal story for an audience before. I showed up at the slam, fought through my nerves, got up on stage, felt the rush, and got hooked. I started storytelling like crazy throughout Boston, predominantly at Massmouth slams and events. Since then, I’ve performed in over 80 shows across eight states.

When Massmouth’s co-founder and longtime leader, Norah Dooley, stepped down as director two years ago, Massmouth’s future hung in the balance. Fortunately, Cheryl Hamilton and three other tellers in our community stepped up to keep the organization going. I was living temporarily in Chicago at the time, but as soon as I returned to Boston, I joined the effort. Cheryl and I have served as Massmouth’s co-directors since.

Great, so let’s dig a little deeper into the story – has it been an easy path overall and if not, what were the challenges you’ve had to overcome?
A smooth road never leads to a good story! There have been plenty of organizational struggles along the way, but one specific challenge inherent in our “biz” is the high-wire act that is producing story slams. Story slams are shows where audience members throw their names into a hat for the chance to share their stories. Producing one of these shows is not for the faint of heart. Think about it: We sell all these tickets for a slam, get upwards of a hundred people there, and…we have no performers. We’re entirely trusting that ten random audience members will muster the courage to get up and tell their story. It can be scary when it’s five minutes till show time and we don’t have those ten names yet. But that same unscripted, without-a-net feeling is what amps up the energy in the room. People who never thought they’d get on a stage suddenly do. You hear stories you wouldn’t believe. The stranger at the table next to you turns out to be a chaplain or a dominatrix or a cancer survivor. Anything can happen.

Massmouth – what should we know? What do you guys do best? What sets you apart from the competition?
Massmouth has a simple mission: Promote the art of storytelling. We do that by holding shows and workshops across the city. At our story slams, held October through April, everyday people get the chance to tell a true, 5-minute story from their lives in front of a live audience. These slams, along with our other shows – which include series like Stories to Scenes at Riot Theater and Stories from the Stage at WGBH – expose more and more people to live storytelling as an art form. We also partner with various organizations to lead storytelling workshops and bring storytelling events to their communities.

We’re certainly not the only storytelling game in town. There are several excellent storytelling shows in the Boston area, each with its own thematic or geographical focus. One thing people often remark on about Massmouth, though, is that we try to be especially warm and welcoming. You could come to a Massmouth slam as a brand new audience member, find yourself chatting with one of the producers, maybe stick around for a drink afterward, and suddenly be volunteering or telling at the next show. To us, that embodies what storytelling is about. People come up on stage to bear some part of themselves to a room full of strangers – sometimes an experience they never thought they’d share publicly. We try to reciprocate by showing that same honesty and openness with anyone who comes to our shows. The whole point of storytelling is for people to know one another better, on a real, human level.

We’re particularly proud of the television pilot we’ve been shooting with WGBH for the World Channel. For the past several years, we’ve held a monthly live storytelling series with WGBH, called Stories from the Stage. Just this past spring WGBH began taping the show for the TV version, which also includes interviews with the tellers. Stories from the Stage make its TV debut on October 9th. For the first time, our local storytelling efforts will reach audiences nationwide – we couldn’t be more excited!

What moment in your career do you look back most fondly on?
Before my involvement in Massmouth, I co-produced a show of women sharing their stories of queerness through performance. We met and rehearsed constantly in the lead-up to the show. And at the end of the process, I learned one of the women had been suicidal. She said that being involved in the show gave her something to live for. Incidentally, she also totally nailed her piece on stage. The audience lifted her with applause.

The pride I feel in that life-changing, life-saving show is magnified many times over whenever I see someone find their voice and own their story on stage. To work up the courage to share oneself truthfully before strangers – and to be genuinely heard – is powerful confirmation that our lives have meaning.