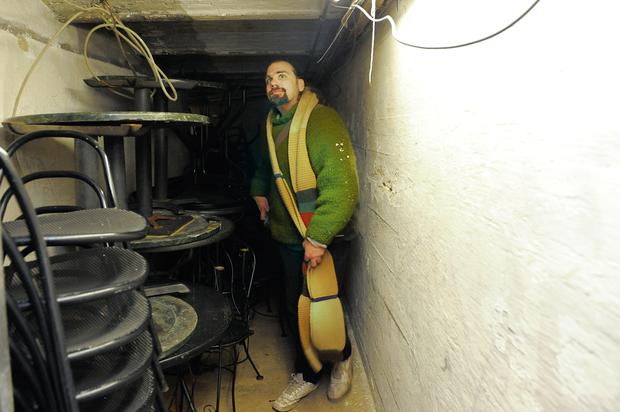 Today we’d like to introduce you to Chris Dowgin.

Thanks for sharing your story with us Chris. So, let’s start at the beginning and we can move on from there.
I was writing my second illustrated book called “A Walk Under Salem” and I started researching the tunnels in Salem to base the story on. During the process I had come up with enough information to write another nonfiction book called “Salem Secret Underground: The History of the Tunnels in the City”. While doing research for what turned out to be two books, I would sneak into open houses. In the process I would complain I had flooding problems in my past basements and I wanted to make sure this basement was dry. So the real estate agents would show me the basements and I found sealed tunnel entrances connected to the fireplace arches. One place the real estate agent said she forgot her keys to the basement I found out years later tended to flood… Also I knew many of the store owners who had locations connected to the tunnels in the downtown so I spent some time climbing through their basements for a while. Along the way I was taking pictures of the tunnels I had found and I had a huge collection of old images from Salem, so by the time I started the Salem Smugglers’ Tour I had plenty to show on my tablet for the tour. The tour came about to help promote the book. It has grown with new information I have found and now the tour incorporates stories from the new book “Sub Rosa” which is about how Salem smugglers/politicians shaped American history through various inventions and political intrigues.

Inventions like Victorian electric cars, the #2 pencil, and the first house lit by electricity. Intrigues like the birth of the Federal Reserve, the Forbes opium empire, George Peabody and his cycle of economic collapses every 20 years since 1837. Plus I go over the real murder behind the game Clue and how it connects to 3 unaccounted for presidential assassinations.

Overall, has it been relatively smooth? If not, what were some of the struggles along the way?
The first problem was I named the tour The Salem Tunnel Tour. Tunnel Tour, everyone assumed you got to walk underground. Tunnels were a huge marketing boon and the worse when they found out they could not walk in them and only see their pictures. When I first started out I gave the tour in an old bank. It is the bank referenced in Janet Evanovich’s “Wicked Charms.” I assume she read my book that talked about the building… So I gave tours of the 2 vaults with these massive doors, a tomb with two runaway slaves under a staircase, a trapdoor, the converted tunnels which looked like hallways now, a secret door above a workbench, the old safe deposit boxes stacked forever, and 7 sealed tunnel entrances. Even though you can walk 6 feet into the tunnels in two locations, it was not enough to always get someone to buy a ticket. Once on the tour, everyone loved it and enjoyed the stories and the old bank with its secrets. Just had to take the word tunnel out of the name, because no matter how many times you say on the website this is an above ground tour people still expected to go in the tunnels. I am still looking for that one person to open up the fireplace arch in their basement and let us through, but I have not found them yet.

Please tell us about Salem Smugglers’ Tour.
I might be the smallest tour company in Salem, I am the one who has written their scripts. In part. When I walk through town I hear the majority of them reference the books I have written. Currently the tour owners are in a battle with city hall. Part of the battle is the town is talking to the other tour companies and are coming up with assigned tour spots. Which would be fine for them, since they all stop at the same locations, but mine is completely different. The other tours focus on the Witch Hysteria and the 1600’s and locations attached to its history and the haunted locations in town. I do give a lot of original information on that period and the haunted places I have personal tales about, but the major focus is on Salem in the 1800’s when it was the second richest city in the nation with the most powerful senators. It is the story of how this money built on smuggling through the tunnels and their political party, the Federalists. These smugglers were people who shaped the Constitution, were behind our national banks, at the beginning of the Robber Barons and the railroad, in charge of our navy, got away with assassinating presidents, were a major part of almost killing 80% of China’s youth from opium, worked with England during the War of 1812, tried cession before the South, and created many of the things we use every day. The Witch Hysteria dose come into play like the ridge the hangings took place on was the same site as the 1914 fire which took out 3/4 of the town and an Indian Massacre in 1624. Plus we talk about the first successful tax revolt which led to many of the participants being imprisoned or hanged 3 years later. Did you know there was a second Witch Hysteria in 1811, the year they closed the old Gaol used in 1692…

If you had to go back in time and start over, would you have done anything differently?
I would have never called the tour the Salem Tunnel Tour. It was the major focus, but its history and not the tunnel of love part. It is a great story started in Boston in 1785. Charles Bulfinch is called on to make the state house. He decides to change its elevation, so he creates the first railroad to be used to move heavy haulage and he begins taking down the Trimount or Tremont. He then removes the dirt on the site of the State House and the three hills and fills in the mudflats of the Charles River. This is the beginning of the Backbay neighborhoods. At the same time the governor Harrison Gray Otis, a member of the Essex Junto and Hartford Convention, has him build him his mansion. Now Bulfinch came up with a clever idea to attach tunnels to the fireplace arches in the basement to alleviate flashing problems and to create a draw system to bring fresh air in the tunnels. Otis had hired him to connect his home to the state house and the river through a tunnel. Many others jumped into the scheme. Soon there was more displaced tunnel dirt filling in the mud flats than dirt from the hills. So many mansions he built with their secrets that they made him into the person known as the “Man who built Boston”. Bulfinch would connect his tunnels to the Longfellow House, Federal Street Theater, Faneuil Hall, India Wharf, the old Prison, and many houses on Beacon Hill. One I believe Edgar Allan Poe lived in. Did you know the author of “Bulfinch’s Mythology” was Charles’ son?

Now in 1801 the Federalists in Salem paid for a similar public work project to fill in the five ponds and the river leading to the cove from the Common near the Hawthorne Hotel. The engineer was Elias Hasket Derby Jr. He was the son of America’s first millionaire. He gathered all those politicians to pay for the tunnels and had the descendants of the first National Guard unit dig them instead of collecting Jefferson’s new custom duties. Bulfinch would make several buildings in Salem that were attached to these new tunnels. President Monroe came to Boston after the War of 1812. There he met Bulfinch. Bulfinch gave him and underground tour of Boston and Salem. Afterward Bulfinch was hired to rebuild Washington D.C. after the British had razed it. He would also be responsible for the various levels of tunnels in our capital. Today the public is welcome to walk through the 3 levels between the Adams and Jefferson buildings of the Library of Congress and walk into the Capital Building through its tunnel.
So the tour has lots of tunnel history, but I should have never named it so…